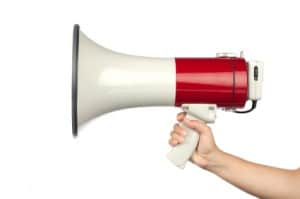 Megaphone diplomacy: is the Bar Council's strategy of making a loud noise the best approach?

It has been a week of strong words. First of all we had Bar Council chairman Michael Todd QC sounding off about the Legal Services Board (LSB), and then on Tuesday Solicitors Regulation Authority chairman Charles Plant was uncompromising about his view of the “small but significant” number of solicitors who are not good enough to be in practice.

Let’s start with Mr Plant, who does like to drop the occasional grenade to liven things up. In some ways it is hardly controversial to suggest that out of nearly 130,000 practising solicitors, there are some bad apples. But the failure of 500-odd firms (about 4.5% of the total) to nominate their compliance officers – an important new regulatory requirement that has not exactly been kept secret – nearly four months after the deadline indicates that the problem is on a much larger scale than anyone would have imagined.

This is a big test for the SRA, which will have to live up to Mr Plant’s tough words when it comes to those firms which continue to show what he called a “breathtaking disregard of regulatory obligations” and do not have their officers in place by the end of the year, or which have nominated unacceptable people to the roles.

There will no doubt be a late rush that will bring most firms in just under the wire, but it is perfectly foreseeable that dozens of firms could still be in breach. Not having a COLP is far from having your hand in the till, but the position is at the heart of outcomes-focused regulation. So will there be mass closures on 1 January when the SRA sends in the heavies to those firms?

It might also be thought that his speech would have the Law Society rushing to its members’ defence in equally strong terms (chief executive Des Hudson was there to hear it first hand). This is what I got from a spokesman: “The solicitors’ ethical code binds the profession and the vast majority of solicitors are honest, utterly professional and ethical, as Charles Plant affirms. But this is a difficult time for many firms, with a changing legal services market, more competition and a flat-lining economy, not to mention the adjustments needed to comply with an evolving regulatory regime.

“We must be careful not to lump together those who have failed to get to grips on time with administrative requirements of the new regulatory approach, with those who bring the profession into disrepute through their dishonesty. With that in mind, we welcome the SRA’s extension of its deadline for firms to nominate their COLPs and COFAs until December, to allow them more time to comply with these regulatory obligations. We hope the SRA will continue to help firms understand better what is expected of them.”

Not exactly a fire and brimstone response.

There was certainly fire in Michael Todd’s belly when he attacked the LSB. Much of what he said on Saturday during the Bar conference press briefing – supported by vice-chairman Maura McGowan QC – echoed what the Bar Council had already said in its responses to the LSB’s draft business plan and to the Ministry of Justice’s triennial review.

On both of those occasions, the arguments went largely unheeded, in particular by the Ministry of Justice, which seemed pretty happy with how the LSB has been operating.

But by suggesting that the new Lord Chancellor, Chris Grayling (who took over after the triennial review had been completed and announced), is sympathetic with the view that lawyers are over-regulated – and by extension that the solution is to disband the LSB – the Bar Council re-energised the issue.

Or, at least, it garnered several headlines. But to judge by the ministry’s response we reported on Tuesday, that’s about as far as it will go. So I can’t help but wonder what the barristers’ body is trying to achieve.

I have no doubt that the Bar Council feels genuinely aggrieved, in part because it has had to be dragged bit by bit to where we are today. At most stages in the reform process the Bar has argued that there was little or no problem with its regulatory arrangements, and that it was being swept up by the Law Society’s failures.

There is some truth in this (such as over complaints-handling), but equally it was restrictive practices at the Bar that were primarily identified by the Office of Fair Trading in its 2001 Competition in Professions report – the report that was largely responsible for triggering the whole process that culminated in the 2007 Legal Services Act. Further, Sir David Clementi was clear that the Bar Council sometimes put its representative role ahead of its regulatory function.

And as my colleague Dan Bindman puts it, it is simply in barristers' nature. They don't like being told what to do and argument is a way of life to them. In short, they are adversarial down to their monogrammed silk socks.

They are also emboldened by having a very sympathetic regulator, which more often than not makes it clear that it's being forced, reluctantly, to do the LSB's bidding.

In April, I suggested that the hostile submission to the triennial review from several bodies (the Bar Standards Board was even more outspoken than the Bar Council) may have been a collective attempt to put the LSB back in its box – many running these organisations think the LSB is too proactive for an oversight regulator and is overstepping the mark by seeking to be an economic regulator shaping the market.

If this is the Bar Council continuing that line of attack, then I can’t see how it will succeed – this is not the way to enhance relations with your oversight regulator so that you can have a sensible and reasoned discussion. It may simply be a case of the Bar being true to itself, but from a broader perspective I just cannot understand what Mr Todd and his colleagues hope to gain.