Escaping from the regulatory maze 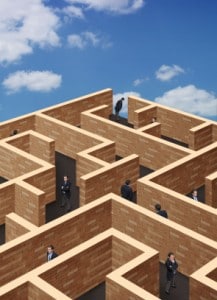 Maze: complaints over difficulty of navigating the legal landscape

I suspect there is no coincidence that the Legal Ombudsman’s website is publicising its first annual report under the banner headline “Regulatory maze”. Those of you with long-ish memories may recall that this was the phrase used in 2003 by the then Department for Constitutional Affairs in the scoping study that paved the way for the Clementi reforms. Sir David himself adopted it to describe the confused regulatory infrastructure which his reforms were supposedly going to untangle.

So here we are, eight years later, with the ombudsman – himself a creature of the Clementi report – complaining that a regulatory maze still exists. “Consumer confusion is exacerbated by the difficulties in understanding the increasingly complex structures involved in the delivery of legal services,” explains chief ombudsman Adam Sampson in the report.

In fairness the context is slightly different. In recommending the creation of the Legal Services Board (LSB), Sir David sought to thin out the myriad of oversight regulators that existed at the time above the frontline regulators such as the Law Society and Bar Council. Of course, by also recommending that the frontline regulators should formally separate their regulatory functions from their representative work, he created a whole new raft of organisations and acronyms, so the overall size of the maze is not that much smaller.

I have that the further away one gets from the Clementi compromise, the messier it looks.

By contrast, yesterday, in his many media appearances, Mr Sampson was focusing on the problems consumers have in knowing whether the person from whom they are buying legal services is actually regulated.

This comes back – as do most of the big issues facing the market – to our old friend reserved legal activities. As a reminder, these are those few areas of legal work which only authorised persons (ie, the various types of lawyer) are allowed to do. Otherwise anyone can set themselves up as “Joe Bloggs, Legal Adviser” and start advising on, say, employment or commercial law.

Will-writing is the area of unreserved practice currently in the spotlight following the Legal Services Consumer Panel’s that it should become reserved, now under formal investigation by the LSB. Alongside this we have the LSB’s wider project to rationalise the scope of regulation, as part of which, as I have reported several times, it is looking at whether the list of reserved activities should be modified, extended or reduced, with the help of Professor Stephen Mayson.

It strikes me that with his comments and even his reference to the “regulatory maze”, Adam Sampson has ramped up the pressure on the LSB, proving – if proof were needed (which I don’t think it was) – his independence from the board that oversees the ombudsman.

While not explicitly saying it, he seemed to be favouring the Solicitors Regulation Authority’s preferred approach to reserved activities, which would be to include on the list anything that would normally be seen as “solicitor services”.

In his work, Professor Mayson identified two justifications for reserving a legal activity: to secure a “public good” or to protect consumers. Adam Sampson has just made the case for extending the list that much more convincing.