Enemies at the gates 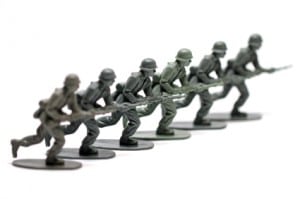 Will entity regulation lead to a charge by solicitors?

The recent debate on the Bar Standards Board’s (BSB) plans to regulate advocacy-focused business structures – entities – pitted Bar Council old-timers against BSB modernists, and it was the latter who came out on top.

It was quite a spectacle: two “ageing radicals” arguing a “‘small c’ conservative” position (their description) – former Bar Council chairman Stephen Hockman QC and HH Judge Owen Davies – in one corner and BSB barrister member Patricia Robertson QC, backed by the board’s director, Dr Vanessa Davies, in the other.

On the face of it the motion was bland enough – that BSB-regulated entities “were unlikely to benefit the administration of justice in the 21st century”. But it soon became clear that what its proposers actually meant by this was “entities will open the door to solicitors flooding (and eventually taking over) the Bar’s institutions and that by inviting solicitor-advocates into its regulatory ‘tent’, the BSB will weaken the distinctiveness of the barristers’ offering”.

The debate which followed was essentially an argument over which side’s position would best preserve the Bar in the face of market competition and other existential threats, since neither side disputed that the Bar’s survival was integral to an effective administration of justice.

Both platforms also agreed that being advocacy specialists was the barristers’ ‘unique selling point’ and that any attempt to compete with solicitors for legal market territory involving acquiring infrastructure – “paralegals and photocopiers” as Ms Robertson put it – was doomed.

On the other hand, the BSB argued that giving barristers the right to conduct litigation was necessary to put them on a level footing; a modest, if belated, response perhaps to the advance of several thousands of solicitor-advocates deep into the Bar’s traditional territory.

By pitching itself as the specialist regulator of all advocates in opposition to the Solicitors Regulation Authority – a “multi-purpose” regulator – the BSB cast itself as the Bar’s saviour. The attraction for the Bar in an expanded BSB, goes the argument, is the maintenance of advocacy as a discrete and exalted arm of the justice system and – no doubt in some barristers’ eyes – an opportunity to preserve their pre-eminence within it.

So why such trenchant opposition? Part of the reason is irritation that the BSB changed its mind between 2009 and 2011 over the number of barristers required to set up an entity under its regulatory regime; a majority of barrister owner-managers was thought necessary in 2009 but under the current plans a majority must simply have higher rights of audience – potentially “one barrister and 99 solicitors”, as Mr Hockman characterised it.

Another explanation for the depth of criticism is real concern that the cherished independence of the self-employed Bar will inevitably be compromised if its members join entities, whatever regulatory safeguards might be put in place to protect it. A refrain of the ‘no to entities’ platform was that conflicts of interest would become more frequent once barristers were linked to one another within entities under contract. Even where formal conflicts do not exist, peer pressure not to upset valued clients will be equally pernicious, they argued.

In opposing the motion, Ms Robertson was candid that the alternative to a “big tent” option for advocates is the likelihood that barristers will switch across to SRA-regulated business structures en masse, potentially leaving the Bar (and therefore, of course, the BSB) to wither and die.

She also stressed, by way of reassurance to the sceptics, that the BSB’s entities will be limited in the sense that there will be no external owners and advocates will still not be able to handle client money.

There was something poignant about seeing two lawyers in the upper reaches of their profession trying desperately to preserve its format for the next generation, even though arguably the game is already lost. Much of their fire was directed at the government and its predecessor for – in Judge Davies’ words – treating “the provision of legal services as [just] another aspect of commercial activity”. The BSB was caught in this barrage, but on most of the fundamentals the two sides agreed.

As Legal Futures has observed before, it is hard to imagine another professional regulator identify itself publicly so closely with the commercial survival of those whom it regulates. The BSB’s debating success probably had a lot to do with the performance of a successful commercial silk (Ms Robertson), who passionately defended the qualities that the motion’s proposers also hold dear – professional independence, fearless advocacy, the cab rank principle, access to justice and so on.

It also helps the BSB cause that barristers broadly agree on the external threats, which include contracting for publicly-funded work, a reduced legal aid pot, fewer opportunities for the junior Bar to learn its trade, the shortage of pupillages, and the high cost of legal education.

To some extent the underlying debate is a generational one. Whereas many barristers who entered a referral profession in another era understandably yearn for a return to the certainties – and security – of the past, perhaps the younger ones, especially those just embarking on a career in advocacy, want the option of competing for work in associations that offer greater flexibility and lower risk than the chambers model.

Right or wrong, the BSB is at least appearing to offer barristers “vision” and talking up the “opportunities” presented by the Legal Services Act. And as Ms Robertson pointed out, if entities are proved to be useless or unnecessary, all that barristers will have risked is a small premium on their practising certificates. But if history shows the BSB to have been far-sighted in lifting some of the constraints on barristers competing, it will have the satisfaction of taking credit for the Bar’s (and its own) survival.