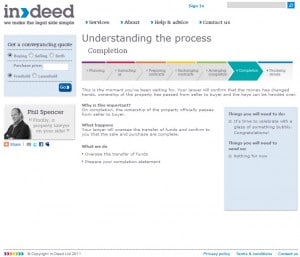 In many ways this week’s launch of online conveyancing service In-deed gives us pointers to the way in which the legal market may develop.

The brainchild of non-lawyers, albeit non-lawyers well versed in the conveyancing market, it is slick, jargon-free and professionally marketed. Lawyers will get sick of hearing this word very soon, but it is about creating a brand.

I even received a press release from the brand consultancy (called, erm, Dave) behind the visual identity. CEO Dan Bobby said: “In-deed provided us with a unique challenge to develop a brand from scratch and position it in a market crying out for new standards to be set.

“A lot of people genuinely don’t know where to go for legal advice, and when they find it, they too frequently feel let down with the process. In-Deed are taking a new approach, giving a better outcome for both customers and solicitors.”

But behind the shiny exterior, there is nothing particularly revolutionary in the concept. The work is done by regular law firms. The fees aren’t amazing but are a darn sight better than the £99 conveyancing deals knocking around the Internet. They are not screwing firms to the floor, although volume will clearly be vital.

Online case tracking is nothing new either, but having seen a demo, I was impressed by the various levels of detail into which the client can go and how consumer friendly the information is. This is a step up from tracking fed by a firm’s case management system.

In-deed should particularly be applauded for making what would otherwise be a referral fee up front and payable by the client. That’s much cleaner and more transparent all round.

Of course, all solicitors would rather get the work in directly and add what would have been the referral or “service management” fee to their fees, but there is a reason intermediaries have entered the legal market, first in personal injury and now in other areas of high street work – solicitors have chosen not to organise themselves to do the marketing themselves on a significant scale.

The question is whether this will change. Surely the ABS world of today – promoting as it is (some) innovation and imaginative thinking in the profession – is different from the one of a decade or more ago that allowed claims management companies to step into the void?

Law Society chief executive Des Hudson believes so, arguing that the next phase of the society’s Conveyancing Quality Scheme (CQS) should be to do “precisely what In-deed is proposing and more”. Essentially he envisages CQS as a direct marketing tool, driving work to solicitors without any third party involvement.

This is laudable, but does the society have the deep pockets needed to make a real marketing impact? Mr Hudson says that in the first two weeks of web advertising, 20 leads were generated for CQS firms.

There isn’t much in CQS which one can dispute – although at its heart is surely a tacit recognition that standards have fallen too far in the conveyancing market, or at least that lenders believe they have. Conveyancing has long been the predominant cause of professional negligence claims.

In fact, In-deed is adopting CQS as standard for its panel firms, but the company puts a greater emphasis than CQS on one crucial area – service standards.

They form part of CQS, of course, but the focus looks to be more on the standard of the actual work. Look at the CQS Client Charter – it could not be any more anodyne. How about something more concrete and not just drawn from the code of conduct – we’ll return your calls within 24 hours, that kind of thing?

It is a truth universally acknowledged that clients – rightly or more probably wrongly – take the quality of legal advice for granted (the debate over the use of the word ‘quality’ in law firm marketing is one for another day).

Arguably little will change if all solicitors’ firms adopt CQS. So there has to be something else to set conveyancing offerings apart from each other.

The standard response over the years has simply been to cut fees, but In-deed sees competition purely on price as unsustainable. Its intention is to focus more on service, believing that conveyancing clients are poorly served now.

Peter Gordon, co-founder of In-deed, says: “There is a disparity between what legal firms think is OK and the needs and expectations of consumers; conveyancing has a long history of keeping customers in the dark.”

There will be conveyancers reading this who feel like putting their fists through the screen because they believe they already do this. As the other founder, Harry Hill, says, if solicitors are right and he is wrong, then In-deed will fail.

One often hears anecdotal stories of firms putting their prices up and to their surprise getting more work as a result. It would be interesting to see research as to why – is it because clients think they are paying for better quality work (there’s that word again) or because they think they will get a better, more personal service?

In-deed’s own research indicates that good communication is far more important to conveyancing clients than low fees. “We will never let more than two days go by without giving you an update,” it promises.

None of this is revoluntionary, even if it may seem so in the legal world. It is, perhaps, mainly about branding and messages, and also access to capital to fund the development of these things (with which ABSs potentially help, of course). Like it or not, it’s not really about the legal work anymore.