Do you heart QualitySolicitors? 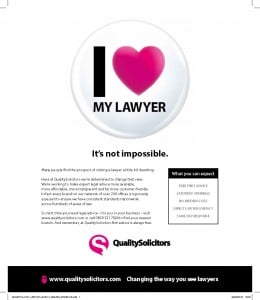 It is two years since I wrote a blog with the deliberately provocative title of ‘Why does everyone hate QualitySolicitors?’ and the critics haven’t noticeably piped down since. The gossip of late has been along the lines of disenchanted firms leaving the network because they weren’t getting enough work and the abject failure of the WHSmith link-up. The notable silence from QS in the second half of 2012 was further evidence of it faltering. To sum it up, ‘I told you so – it was never going to work’.

Nonetheless, I am no closer to predicting whether QS will succeed than I was two years ago. They need to do more to stand out – QS’s five service promises, apart from Saturday opening, do not mark them out from other law firms – but they know that.

As we will be discussing at the Legal Futures Conference ‘2020 Vision’ on 7 November, the battle to become a national consumer legal brand is hotting up. The likes of Slater & Gordon, Irwin Mitchell, the Co-op and Direct Line have the heft to match and even exceed what QS is doing nationally. They may struggle to do the same at a local level, but on the other hand they don’t have the difficulties of herding over 100 firms.

Transparency note: I wasn’t paid for appearing at the conference but they did pay for my train and a very nice hotel room. Also, QS are paying Associates of Legal Futures (try it – it’s great value) and Craig Holt is speaking at the 7 November conference. But when I write about QS, it is because I see news value in doing so (which is frequently, because my analytics show that people want to read about them), not because of any financial relationship. You’ll have to trust me on that.