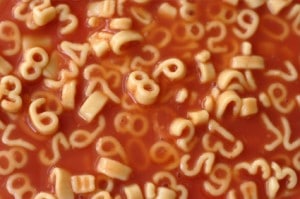 Number spaghetti: government made a meal of presenting figures

After what seems an all too brief season of peace and goodwill, hostilities between the government and criminal lawyers have rapidly resumed, and appear to have taken a more sinister turn.

With a strike by criminal barristers across England and Wales looming, the Ministry of Justice chose the first working day of 2014 for a not-so-subtle pre-emptive ‘strike’ of its own by releasing figures detailing the earnings of criminal barristers in 2012/2013.

The timing seems far from coincidental. One might argue that the beginning of the year is a logical time for publishing such information. However, a search of the database of government publications in recent years reveals that no such equivalent statistical release has occurred – not at the beginning of the year or, in fact, at all. The document, described as an ‘ad hoc’ addendum to the more low-profile Legal Aid Statistics Bulletin, is therefore unique.

As this implies, such figures would normally be buried amongst other statistical information, stripped of the emphasis this release has been granted. As such, collation of this information must have been specifically commissioned late in 2013, presumably with both target (criminal barristers) and timing (prior to their half-day of action on 6 January) carefully selected.

The explicit purpose of the document is to “address the public interest in the area” – but public interest is a malleable concept. Whist the government might argue that the statistics provide the average citizen with an idea of what criminal barristers’ earn, the subsequent use of the information suggests that the implict purpose is to generally portray criminal barristers as affluent.

As such, in responding to press enquiries about the strike, the government has been selective in their focus. It has highlighted that in excess of 1,200 barristers received £100,000 in fees last year, whilst six earned over £500,000. Moreover, legal aid minister Shailesh Vara stated that the average earnings of a full-time barrister are £84,000.

This figure is more than three times the average national salary, providing a clear message for the public – striking over fee cuts cannot possibly be justified when barristers earn so much.

The timing of this publication strongly suggests that invoking such a train of thought is the intention. This approach belies the government’s rather casual relationship with the truth. The six high-earners which the government has chosen as a demonstrative example of the Bar’s wealth represent 0.1% of the 4,931 criminal barristers receiving fees from legal aid. The 1,275 barristers (26%) earning over £100,000 can be compared with the 2,255 (46%) earning under £50,000 last year.

Importantly, the document itself clearly underlines the dangers of misinterpretation and the caution with which such figures should be treated. It highlights several factors that should be considered. The figures may represent several years’ worth of earnings, which just happened to be paid in the last year – a problem due in part to the lag in processing legal aid payments. VAT of 20% (which must be paid back to the Treasury) and disbursements (such as travelling expenses) are included in the figures. Barristers must cover professional overheads from their earnings; for example, a proportion is payable to chambers in rent and clerking fees and other expensive items such as wigs, gowns, and books must be accounted for.

The majority of criminal barristers are also self-employed and therefore must deduct income tax and national insurance contributions from the figures, which represent gross earnings.

Moreover, other factors not mentioned in the document must be considered. Self-employed barristers do not have state pension provision, and are not entitled to holiday or sick pay. Barristers are also compelled by the Bar Standards Board to take out professional indemnity insurance. If one deducts all of the costs above, £56,000 (as the median fee) begins to look a lot more modest.

Considering that at least 46% earned less than this last year (which may represent several years’ worth of fees), a substantial proportion of criminal barristers would be considered low-earners by any normal standard. Of course, the government chose to omit all of the factors mentioned above in its public statements, ignoring the advice of those who compiled the statistics.

When considering the amounts earned, one must also remember that the work undertaken by barristers varies enormously in complexity. Very high-cost cases (VHCCs) are lengthy and technically challenging, representing the most difficult and serious work criminal barristers can undertake. Those barristers earning £100,000 and above will be primarily performing such work – the most highly-skilled professionals in their field with many years of experience.

There is a spectrum of experience and skill in any group, and consequently a hierarchy of earnings. In particular, to select the six barristers receiving in excess of £500,000 as the benchmark for barrister earnings across the board is akin to using the chief executives and directors of a large company to illustrate the salaries paid to its entry-level staff.

Moreover, barristers – like similar professionals – have trained for many years and undertaken extensive and costly education, usually accruing very large debts in the process (with a figure of £70,000 suggested by The Guardian). It seems only fair that such commitment to a profession, which many do not have the ability or determination to enter, should lead to a higher than average salary. Add to this the long hours, and the stressful and sometimes traumatic nature of the work – covering offences of violence, rape, domestic abuse, terrorism, and paedophilia – and you have salaries which arguably undervalue publicly funded barristers.

Government misuse of statistics is hardly new. However, the careful timing of this release appears to represent a more determined effort to derail opposition to cuts to criminal legal aid. This is a progression from the normal justification that England and Wales has “one of the most expensive legal aid system in the world”.

Through misrepresentation of empirical evidence, it is clearly suggested that large portions of this budget are being devoted to the handsome annual salaries of lawyers who have the gall to complain about cuts. Some of the press coverage has taken the government’s baton and run with it. Reporting on the figures, the Daily Mail chose to intersperse its replication of the government’s selective focus with large images of Mark Bridger and Stuart Hazell – juxtaposing the debate about legal aid with murderous paedophiles. This approach, of course, fails to consider the need for properly funded prosecution and defence advocates (both roles performed by criminal barristers) in order to ensure such offenders are convicted at all. More disturbingly, the Mail also chose to target one striking barrister for owning an expensive handbag, with the clear suggestion that those on strike cannot be struggling for money. The article failed to mention that, supposedly, the bag had been a gift to the barrister for nursing her terminally ill father.

As the first strike by barristers in 600 years, this week’s action represented a new and more exposed form of public dissent. The government and sympathetic press appear to have responded by personalising their attacks, focusing on salary and perhaps class.

More importantly, such an approach represents a smoke screen, a distraction from discussing the core issues – the impact cuts may have on the operation of the criminal justice system and the consequences it will have for defendants and complainants.

The Bar insists the action was not about protecting their salaries, but about the future effectiveness of criminal justice. One must, of course, weigh this statement carefully too; it is rare for a group to strike for entirely altruistic reasons. However, the attempt to imply that ‘fat cat’ barristers are striking over pay whilst raking in large sums of public money is misleading and underhand.

It ignores the many arguments put forward by the legal profession about the impact cuts will have on the availability and quality of representation, the limitations on preparation and resources for both prosecution and defence, the future recruitment of talent to the Bar and the future of the judiciary.

Distracting from a more substantial debate is also the oldest trick in the book. Pursuing this tactic in the guise of balanced statistical analysis is surely a new low in this increasingly bitter dispute. Going into the new year, it is a clear sign that the government has a counter-strategy, planned in advance.

If the direct action taken by the legal profession escalates, which it almost certainly will, one wonders what depths the government will be willing to plumb in order to undermine its critics.