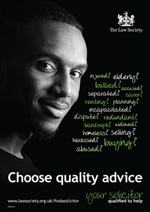 It’s that time of the year when the Law Society prepares us for its annual assault on the nation’s consciousness through an advertising campaign promoting the “solicitor brand”.

Those with long memories will recall many a campaign over the years. The society does not have the most glorious history in this regard: back in the 1970s there was the controversial “Mr Whatshisname” (scuppered by an irate solicitor who changed his name to deed poll to Mr Whatshisname), then there was the not very super-looking superhero Will Power, and more recently we’ve had the derided “My Solicitor, My Hero” and in the last year or two “Help! I need somebody”.

The theme of this year’s campaign is the somewhat less catchy “Choose Quality Advice” (a bid to reclaim the Q word from QualitySolicitors, I wonder, given the unhappiness of many solicitors at what they see as the appropriation of the term to the implied detriment of non-QualitySolicitors firms?). The society says it “aims to build on the idea that a solicitor is the most qualified person to advise on many of the common legal issues people face”.

The focus this year is on outdoor advertising – the society claims the campaign will be seen over 450 million times (no, I don’t know how they know that either) – with advertising and editorial features in 19 top regional papers; advertising on 220 railway stations across England and Wales, and inside 5,000 buses and on some bus rears; and PR coverage in local media.

I’ve been waiting for the last couple of days for the Law Society to tell me how much this is all costing the profession, but to date no figure has been forthcoming.

But it has told me that last year’s campaign cost £500,000. For that the society said it secured £1.2m worth of media space, “which translated into 396m opportunities to see”. The press office apparently secured over £1m of additional PR value, while the profession ordered over 800,000 items of promotional material.

Further, the society trialled ‘pay per click’ online advertising, which resulted in:

That last figure is the one that seriously impresses me because the site has good traffic already and it indicates that the campaign did have a genuine effect, rather than just being about loads of adverts flashing, ignored, in the corner of a webpage but counting towards the 16m figure.

For all that, it is some way from a search on the Law Society’s database to a fee-paying instruction, and these could be people who were looking for a solicitor anyway and would just have used another online facility (albeit one that would probably have cost the solicitor a referral fee or similar).

So the question one can ask (but not answer definitively) is whether this is really worth the money and effort. Does it improve the image of solicitors? More importantly, does it drive people to solicitors when either they would not have sought legal advice at all, or would have gone to a non-solicitor? None of the statistics can actually answer these questions; in fairness, that’s the nature of advertising.

Or – let’s be cynical for a moment – is this really about Chancery Lane proving very publicly that it is doing something to promote the profession?

I’ve written before about the challenges facing the society if it wants to retain/build the confidence of solicitors. At the heart of its response is the secretive Blueprint change programme. As I understand it, this will involve the Law Society being restructured to provide a four-tier “customer offer” to solicitors:

The ultimate aim here, I believe, is to make the society’s representative activities self-financing, so that it can survive if and when the decision is taken that Chancery Lane can no longer share any of the annual practising certificate fee income. To do that, it needs solicitors to buy what the society is selling.

But for the time being, it is selling solicitors to the public. Many people on this and other websites talk about the growing importance of branding in legal services, especially with well-known consumer names poised to enter the market, and there remains cachet in the brand of “solicitor”.

So one can understand the desire to promote it. The Law Society’s campaign cannot do any harm; how much good it will do, however, is another thing altogether.