Behind closed doors: the SRA’s problem with transparency 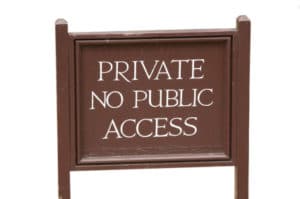 It was only in January that I wrote how we religiously attend meetings of the Solicitors Regulation Authority’s (SRA) board. Well, may the appropriate deity (the SDT?) forgive me, because we lapsed only a week or so later: the meeting was being held in Birmingham and such was the paucity of the agenda that it simply didn’t justify the time or cost of the trip.

This has been an increasing feature of the open sessions since Charles Plant – who made a conscious effort to make them more interesting after the last time this issue came up – finished his stint in the chair. Even what’s on the agenda is usually nodded through – the debate has clearly been had in private.

But now we can drop the habit for good as the SRA has decided to stop open sessions altogether and limit reporters to a beefed-up post-meeting briefing – which we can attend in person or remotely as the board is holding more meetings away from London – with senior staff, board chair Enid Rowlands and, for the first time, other board members. Papers, we are told, will be supplied in good time in advance.

And Wednesday’s first attempt was not smooth. The SRA participants were half an hour late, there was just one paper sent in advance – no agenda or chief executive’s report, previously a staple of the open session – and the chief executive himself, Paul Philip, was absent, as were any ordinary members of the board.

With just one thin paper before us (although we could ask about anything), most of the briefing was taken up by me and other journalists complaining about the new format.

First, the SRA’s justification. The open part of board meetings is called a ‘public’ session – this is a public interest regulator, after all – but unsurprisingly, the public are not exactly banging down the door to get in. The only outsiders who attend are the press and only rarely are they from outside the legal media.

So the board wants to find other ways of engaging with the public – the night before this week’s meeting in Cardiff, the SRA held a reception in Cardiff Bay for about 70 people. More generally the SRA has done an excellent job in seeking out the public’s views to inform its Handbook rewrite.

That’s all good news. But in the debate we had on Tuesday, SRA representatives seemed obstinately unwilling to look beyond the ‘public’ tag and acknowledge that another important aspect of public sessions is that legal journalists can report to the profession on the board’s work. Solicitors are paying for the regulator – it’s surely not too much to ask.

That’s not to say the SRA doesn’t engage directly with the profession, of course, and in fairness it is generally obliging when dealing with the media. But solicitors are busy with their jobs. For better or worse, monitoring the day-to-day work of bodies like the SRA is my job. Immodestly, I think Legal Futures does it pretty well.

The SRA can point to plenty of others in the legal world – not least the Legal Services Board – who do not hold open meetings. But as my mum always told me as a kid, two wrongs don’t make a right, and I have long called on the LSB to change its position. Unlike the SRA, though, it hasn’t been meeting in public since its creation.

The answer, frankly, is obvious. Don’t close the board to public view. Make its meetings more interesting and relevant. What is there to hide?

Of course, some things need to be confidential, including early policy discussions, but I have never seen a reason why the final debate on a policy should not be held in a public session. Let us see that board members are happy with the evidence, interrogating the executive, and generally doing what boards should be doing. Don’t simply tell us afterwards that they did.

At a time when the SRA is demanding ever more transparency from those it regulates, the irony is obvious. As is the need for a body that constantly reminds everyone that it is a public interest regulator not to close its doors to public gaze.