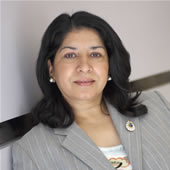 So farewell (almost), Zahida Manzoor. Her final annual report after more than seven years as Legal Services Ombudsman is understandably reflective ahead of the post’s abolition on 6 October when the Office for Legal Complaints (OLC)/Legal Ombudsman (no, we’re not sure which to call it either) opens for business.

The report indicates the progress that has been made since she took over in March 2003, even if in places it is presented in an overly favourable light by the choice of which particular year to compare current performance against. But Ms Manzoor deserves a chance to bask in the glow of her achievements. It is fair to say that she has not endeared herself to successive leaderships at the Law Society and Legal Complaints Service (LCS) and many was the time that officials complained to me about how awkward and unreasonable she was being (although I should say she has always dealt with me in a most pleasant and helpful manner).

However, as ombudsman – and also as Legal Services Complaints Commissioner more directly overseeing the Law Society’s complaints-handling operation (a role that has ceased earlier this year) – she should take a good share of the credit for turning the disaster that was complaints-handling into a success story that has laid a solid foundation for the OLC.

The credit is not, of course, hers alone – it took time, but the Law Society finally grasped the nettle, and the LCS’s leadership of chairman Shamit Saggar and chief executive Deborah Evans, deserves praise too. But the pressure, cajoling and support Ms Manzoor has brought to bear has undoubtedly played a major role in getting the Law Society to where it is today. It was around a decade ago that the Office for the Supervision of Solicitors (as it then was) was warning complainants that it may well take a year for their case to be considered. Now all but a handful of the most difficult cases are concluded in less than a year.

She has made miners a particular focus, and the figures released in her report back up her assertion that these cases “have raised some of the most important service and conduct issues in the history of legal service complaint handling”. Nearly 100,000 complaints (bear in mind that there are fewer than 15,000 complaints a year about all lawyers at the moment), more than £5 million of wrongful deductions repaid, with many more millions to come – it makes for shameful reading for the profession.

The irony, of course, is that now the LCS is performing well, it will shortly close down; it is often forgotten that dissatisfaction with how the Law Society was handling complaints was a major driver for the Legal Services Act. It seems almost certain that Vince Cable’s reducing regulation committee will give the OLC the green light (see story) and so this particular clock will not be turning back. The reality is that however good the LCS’s performance is, the perception that it is the Law Society handling complaints against solicitors will forever fatally undermine it. And that is not to say there aren’t areas where the OLC cannot improve on the LCS – consumers are likely to prefer its less formal and adversarial approach, for example.

So thank you, Zahida Manzoor, for giving me much to write about these past seven years and for doing your bit to help lawyers realise that part of legal services is providing a proper service.