A deluge of due diligence? 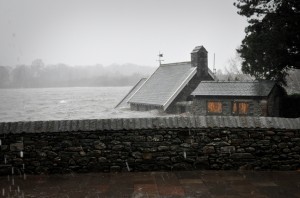 Flooding: a risk for home owners and conveyancers alike

It’s been a winter like no other… or has it? Perhaps this time it’s just rain and wind, not snow and ice. Is this simply what nature throws at us on our rocky outcrop in the North Atlantic?

What’s certain is that weather patterns have become extreme over the last 15 or so years, prompting climate scientists to rewrite models predicting more severe weather bringing more moisture and therefore more flooding. But what does this mean for home buyers and the conveyancers acting for them?

Flooding isn’t predictable and you cannot make assumptions that any given property will not flood. It can and will happen anywhere – not just the usual river that rises and falls, but the forgotten culvert and the scourge of the coastal surge pushing tidal and fresh water further inland than ever before.

Soils are also now so saturated that even steady drizzle can bring on the most insidious of floods – groundwater flooding. In some areas, there’s simply nowhere for the water to go anymore. Streams respond immediately and the water table just can’t cope. And neither can sewage systems. Built decades ago, many are too narrow to cope with sudden deluges.

At a local level, they can be overwhelmed and back up into houses, leading to contamination, property damage and heartbreak for your client.

Will insurance offer a helping hand?

Vulnerability to a flood event is now as widespread as the claims that are peppering the maps of insurance companies across the country. The new Flood Re insurance scheme, which will provide a capped premium based on council tax band, funded by a general levy on all policies, will help those already trapped in high flood risk areas.

But it is increasingly clear that more property will soon be excluded from its protection. As well as properties built after 2009 and those in the highest council tax band (H), leasehold, commercial and the private rented sector will be outside the scheme, meaning a wide range of property owners and lending decisions could be affected.

In terms of equity security, lenders are scrutinising flood risk more closely than ever. The Law Society produced stronger guidance last year on the need for conveyancers to verify insurance availability as this could impact lending, as well as examine all aspects of flooding risks, including those from rivers, the sea, surface water but also groundwater.

In recognition of this, CoPSO (the Council of Property Search Organisations, of which SearchFlow is an executive member) recently enhanced its Search Code. This ensures that all members provide flood searches featuring these datasets and providing clear guidance on the likelihood and risk probability of a flood occurring. These are based on past incidents and extents and are adapted for where flood defences are implemented.

So, the situation is simple – flooding is a fact of life, becoming more widespread and hurting home owners caught in an ever more vicious and expensive spiral of clean-up and repair. Surely, for the sake of £20 in a conveyance, solicitors should make flood searches as routine as the local authority search?

After all, the code of conduct is clear on explicit client-care guidance on undertaking searches relevant to the area. We see many search packs being ordered in flood-prone areas and where our flood alert tool advises of the risk, but a detailed flood search is not included.

Nationally, just 17% of local authority searches ordered, included a flood report. Somerset, now a month underwater, leads the way at 26%, but still only just over a quarter, despite the clear and obvious risks. Worse still is Kent at just 16%, where swathes of river flooding have occurred in Tonbridge, Yalding and Sandwich. And with the largest river catchment system, massive coastal flooding and erosion hazards, Yorkshire lawyers ordered flood searches in just 12% of cases.

Whether through greater media publicity or intervention from lenders to ensure effective checks ahead of loan completion, conveyancers are sure to come under increasing pressure to make these necessary checks. The end result has to be clarity and certainty with each property transaction, demonstrating effective due diligence and practice risk reduction.