The surge is on: subsidence claims rise 400% after heatwave

Subsidence damage is set to soar after our record-breaking summer heatwave, according to two key indicators, leading to a significant rise in insurance claims this autumn.

We reported earlier in the summer that the lack of rainfall was starting to impact on clay soils through dramatic levels of shrinkage and cracking. Tracking the widely used MORECS (Met Office Rainfall and Evaporation Calculation System) data, this trend has continued.

Since the start of August through to the middle of September, there has been a two and a half time increase in moisture loss over the same period last year. The worrying element in this is that it is still very early in the subsidence cycle, and many parts of south and eastern England have still seen so little rain.

MORECS measures water evaporation and soil moisture deficit for the UK calculated by Met Office and provides a strong indication of the ‘dryness’ of the soil.  The critical value that denotes the potential increase from tree and vegetation related subsidence is a maximum MORECs score of 308.

Although temperatures have fallen, the weather remains dry in prone areas and the MORECS has now reached this maximum level, confirming the ground to be at its driest since 2003.

Insurers are reporting domestic subsidence claim increases of up to 400% of normal volumes since the middle of July.  They expect them to remain at these levels through September with the possibility of them increasing further.  Commercial claims have also increased by some 200%, but are likely to rise further, as they are often notified later than domestic claims, as third parties are often involved 2018 has been declared by claims experts as a subsidence surge year and loss adjusters are implementing plans to resource the incoming claim volumes. 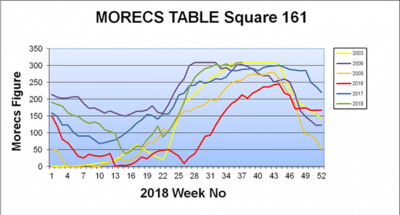 Comparison on 2018 to last year and previous surge years

The underpinning industry is also readying itself for a busy autumn and winter. Rob Withers executive director Association of Specialist Underpinning Contractors, says “After the hot and dry weather, and with little rainfall, all the indicators are there. Subsidence has become something of a forgotten peril on the insurance radar until this year where it will be back to the top of the agenda.”

The cracks are appearing

Remote monitoring company Moniteye are also tracking properties in London and noticing alarming trends. These properties are monitored remotely every 8 hours and data confirms cracks are widening due to the combined effects of the unusually dry summer weather and moisture seeking tree roots, causing clay shrinkage of the founding sub-soils.

Director Graeme Phipps comments; “Despite heavy and short periods of rainfall, the overall trend is suggesting an insurance subsidence claim surge is on the horizon. A subsidence claims surge has not been experienced for a number of years but our data shows the rapidity of crack movement directly correlated to the hot summer  we have just had.

Future Climate Information’s environmental reports automatically include a postcode specific subsidence risk rating from our partner Property Assure.  This level of data accuracy ensures far greater accuracy and clarity on the risks for homebuyers and conveyancers to make further enquiries as part of their due diligence.

For more information, contact us on 01732 755 180 or email us at info@futureclimateinfo.com