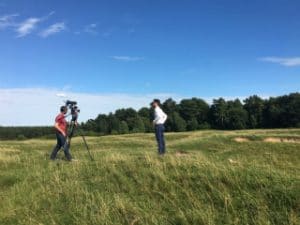 Terrafirma’s CEO Tom Backhouse being filmed for the show.

Look out for Terrafirma’s [1] CEO on the new series of Sinkholes, starting tomorrow on Channel 5.

After the success of the first series, produced by Boomerang Productions for Channel 5 and initially airing in November 2017, Terrafirma’s CEO has been asked back to star in the upcoming first episode of Sinkholes Series 2.

Tune in tomorrow at 9pm on Channel 5 on Tuesday to catch the full episode or catch up on all episodes by visiting www.my5.tv [2].

In the first series, Terrafirma were extensively involved throughout the creation of the series, providing maps, data, research, stories and of course, our very own CEO Tom Backhouse, who presented much of Episode Two. In this episode, Tom and Terrafirma criss-cross the UK exploring human interest stories of where mining and natural sinkholes have caused disruption and sometimes deaths.

The episode featured key stories in Birmingham, where a coal mining-related sinkhole had collapsed only days before. Tom was first on the scene to explain the origins and impact of the sinkhole with the owner, before explaining the potential for more to occur where similar mining activity existed. This year, the series revisits this sinkhole showing how important a new official CON29M, exclusively provided by Terrafirma, is when identifying potential mining hazards.

Another story explored the impact of a mine shaft on one homeowners plans to sell her home, whilst another investigated the long-term impact of chalk mining on the livelihood of one family in Bury St Edmunds.

You can still catch the episode by clicking this link: https://www.my5.tv/sinkholes/season-1/episode-2 [3]

This year, Tom has been filming across the UK again for the second series, with Terrafirma providing extensive input for many of the upcoming episodes. Beginning tomorrow at 9pm, the first episode features Tom Backhouse as he investigates a property in Cornwall, that has been plagued by ancient, shallow tin mining. With the help of Cornwall Consultants and Ground Stiffness Surveys, the episode uncovers the origins of ground movement beneath a property that has experienced multiple collapses since 2016.

For more information on the series or Terrafirma, please visit our website: www.terrafirmasearch.co.uk [4]