Something rotten in the air in Rottingdean 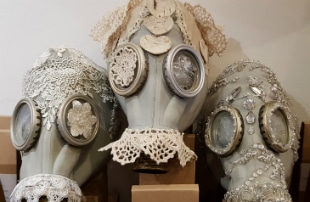 Gas Masks designed by Elif Klose for her shop window

Look on any map and the village of Rottingdean should have a charmed position – nestled in a dramatic chalk valley of the South Downs, right on the seaside: long sweeping views of hills and bracing sea air. The reality could not be further from the truth as residents and shopkeepers choke on the decisions of a council struggling to cope with traffic congestion.

The postcards in the newsagent on the High Street in Rottingdean show a town with a rich heritage – old medieval and Georgian buildings, tales of smuggling and an increasing popularity for 18th century residents and visitors who wanted to escape the dubious and raffish character of nearby Brighton.

The local geography compresses the roads into a cramped and bottlenecked series of twists and turns, which culminates in the town’s High Street. Here, ancient buildings lean in and overhang the road which has become ever busier – not just because the town has become more popular to live in , but also as an unofficial eastern by pass and rat run for Brighton commuters looking to access the Marine Drive along the seafront.

Rottingdean has been the subject of an Air Quality Management Area (AQMA) since 2013 as levels of nitrogen dioxide (NO2) have exceeded the statutory limit set by the government. The 2015 Air Quality Management Plan pinpointed the High Street as the most polluted street in the Brighton area based on hourly Emissions/Available volumetric Street Space – coming in at a staggering 11.3, more than twice that of the A23 Grand Parade in the middle of Brighton.

Brighton and Hove Council sought to create a solution to free up a High Street woefully ill-equipped to handle the volume of traffic in both directions.

In October 2019, they launched an 18 month trial and implemented a chicane of bollards and obstacles, as well as a yellow box to prohibit traffic in certain locations to allow oncoming vehicles to pass. Early indications are showing that this has failed to address the issue. Shopkeepers have complained that it has not only increased the air pollution but made it more dangerous as drivers play a game of chicken to see who can get past the bollards first.

This standing traffic and overhanging buildings has “locked in” high levels of NO2 and PM2.5 fine particulate pollution. Those drivers that do behave themselves then accelerate away from the obstructions, pumping more concentrated exhaust fumes into the air.  Even though the road is a few hundred yards from the beach, the prevailing wind doesn’t get up the road to clear and move the air.

Well-known local clothes designer Elif Kose runs a successful boutique on the High Street. She says the traffic and air pollution has gone from bad to worse. The period up to Christmas is the busiest time for her, but rather than a festive display, chose to highlight the issue with two mannequins dressed in evening finery but sporting gas masks. A sign says “Switch your Engine off, we want to breathe”

Elif is frustrated and concerned at how bad the pollution has become. “The school runs and commutes in the morning and afternoon are just impossible. You can hardly breathe. Queuing traffic backs up the High Street. Some people are kind and switch their engines off and wait patiently. I think the bollards have made many drivers more aggressive and speed past them.  The amount of time I hear tyres screech, I fear that one of the cars will come into the shop.”

The net effect of the restriction in the High Street is to free up the congestion on the wider Marine Drive near the seafront, but push the problem back into the village on roads that are the least equipped to deal with it. Improvements to the A27 trunk road and the prospect of more housing development in the area suggests this will only get worse in the short term unless something more radical is done.

The listed buildings that line the High Street can’t be knocked down, there is no space to put in a bypass and a tunnel under the Downs would be prohibitively expensive.

Elif thinks the only answer is a one way system that would at least keep the traffic moving and spread the pollution out along the road further. She has even done her own drawings of her ideas but, naturally, has been too busy designing outfits during her peak selling season.

She continued: “I have a friend who moved down from London a while ago and from the moment she got here, she developed a bad cough and it hasn’t gone away. So much for the good sea air!”

When she has more time, Elif would like to take the mannequins and gas masks around the country to other small villages and towns plagued by traffic pollution. She believes not enough is being done to publicise the harm to local shoppers and businesses on a daily basis.

The Council is keen to gain feedback on the trial in the next few months and will review the situation again later in 2020. Realistically, the residents and businesses could have many years ahead of them with potential health and safety concerns, threatening lives and livelihoods.

A Nationwide Issue – Could your client be affected?

Understanding the levels of air pollution where your client plans to move to is essential, especially if they have a young family or are planning to start one. If your client is looking are looking for business premises on a high street or trunk road, doesn’t your client have a duty of care to their employees about the daily risk they could face?

Earthsense’s unique national MappAir® data is now available in Future Climate Info’s Premium Environmental Report or FCI Retail Report. It provides a vital indicator of air quality in the vicinity of the home or business and is essential reading for residential or commercial property transactions.