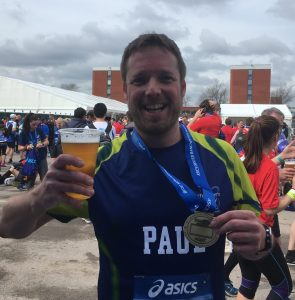 Hudgell Solicitors’ Head of Travel Litigation Paul McClorry is preparing to run 48 miles in two days to raise funds towards the Martin’s Mountain appeal in aid of The Spinal Injuries Association.

Mr McClorry is part of a group of representatives from the insurance and legal sectors taking part in the David Goggins Challenge later this month, running 4 miles every 4 hours, for 48 hours.

The test of endurance was created to raise money for charities by the ex-navy seal and famous American Ultramarathon runner who has become famous for his super human feats of strength and ultra-endurance.

The challenge, which will start at 4pm on Thursday 27th May and end at noon on Saturday 29th May, is designed to test the limits of even the most well-trained marathon runners, as when complete it totals almost two marathon distances.

The group have worked together to train for the challenge and have each created a JustGiving page to donate to their own chosen charities.

Mr McClorry has chosen to support the Martin’s Mountain appeal, for which Hudgell Solicitors is collectively aiming to raise £100,000 towards through various events and staff challenges over the coming months.

Mr Hibbert, 44, was left in a wheelchair after the Manchester Arena bombing in May 2017 and is aiming to both inspire others and raise £1m for The Spinal Injuries Association by climbing Mount Kilimanjaro in a custom-built Bowhead hand bike this September.

“We saw the Goggins challenge, began chatting about it and decided we’d love to get involved,” said Mr McClorry, who is based in Hudgells’ Manchester office.

“We chose charities that are close to our hearts and agreed to give it a go. It’s going to be hard. Whilst we are aware of the endurance needed to get through the physical challenge, we are actively preparing for the mental sufferance we expect from lack of sleep and lengthy rest. But we have been training for it for several months and we think we’re ready to take it on!

Other charities being supported include Fans Supporting Foodbanks, a joint initiative between rival Liverpool FC and Everton FC supporters to tackle food poverty in Liverpool, and Brain Tumour Research, which is dedicated to funding scientific research into brain tumours whilst campaigning for more national investment into this research.

To donate and support each company in their challenge head to: