[1]Slough features the highest density of property titles outside of London owned by companies registered overseas, according to new postcode analysis of Land Registry data by Search Acumen [2], the conveyancing search provider.

Land Registry lists nearly 100,000 (99,345) freehold or leasehold titles across England and Wales as being owned by foreign-registered businesses, including 675 within Slough’s ‘SL’ postcode area. Search Acumen’s analysis compares this to the number of addresses within each area to identify the density of these titles with overseas owners.

The results indicate that Slough has the highest concentration of these titles outside London. This is likely to be influenced by the status of Slough Trading Estate as the largest industrial estate in single private ownership across Europe¹.

The data also shows that over half (55%) of the titles owned by businesses registered overseas as of October 2015 were bought during the period 2010-2015.

Graph 1: Original year of title purchases registered to overseas businesses as of October 2015 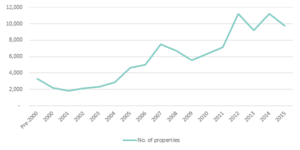 Relative to the number of addresses in each area, Search Acumen’s analysis indicates the top eight postcode areas for titles owned by firms registered overseas are all within London, with only Slough and Manchester challenging the capital’s appeal to foreign firms.

However, looking beyond inner London reveals a much wider geographic spread of areas with an above-average percentage (0.17% outside central London) of titles owned by overseas firms, compared with postcode addresses – ranging from Newcastle upon Tyne in the north to Brighton in the South. The true percentages of titles owned could be even higher as titles can incorporate multiple properties. 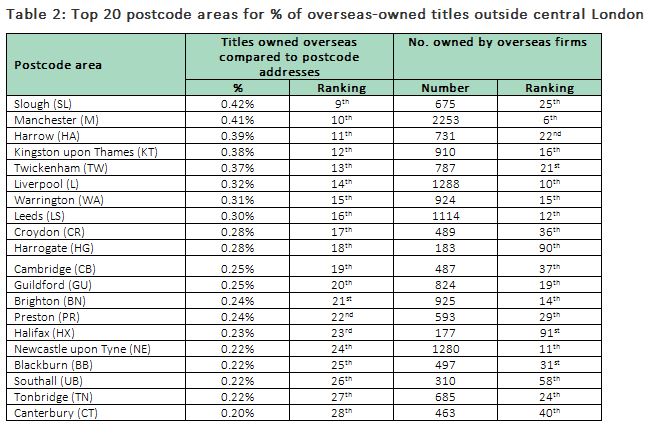 Comparing counties across England and Wales also shows that, while Greater London leads the way with over 44% of foreign-owned titles located here, the top ten shows an apparent North/South divide. Five Northern counties feature alongside three of the Home Counties, with the West Midlands sandwiched in the middle.

“There are two things we can learn from this analysis: firstly, that the reach of overseas business investment in UK property stretches far beyond the M25 to areas you might not immediately think of.

“The potential for complications to occur when carrying out these kind of transactions is significant, which makes it vitally important that conveyancers and commercial property lawyers across the UK are alive to the latest developments, particularly relating to fraud.

“At the same time, our findings highlight the value of Land Registry data in shaping the nation’s understanding of our property market and the various interests at play. The debate has been raging over Land Registry privatisation in recent months, but we firmly believe that keeping it in public hands is the best way to maintain its integrity.

“This simple step will ensure that data can be gathered objectively and is subject to fair and increasingly open access, both to support business innovation and public confidence in property ownership.”