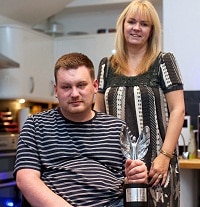 Daniel was awarded Daily Mirror Pride of Britain award in 2013

Her son Daniel, a young man in the prime of life and who was just days away from joining the army, had been hit by a car and thrown from his bike as he cycled to work.

“I’ll never forget that call,” says Michaela, 46. “It’s like your world stops, and you just panic.

“We rushed to the scene and when we arrived, the paramedics were on the floor with Daniel. It was awful. When they put him into the ambulance, I went in with him and he kept saying he couldn’t feel his legs. The paramedics had drawn a line across his chest to show where he had feeling and where he didn’t.

“I kept telling him he couldn’t feel below the line because he had been in the cold. But I knew.”

Michaela’s instinct was right. Daniel’s injuries were so severe that he was left paralysed from the chest down, as well as suffering a serious brain injury and a stroke.

He survived, but was left unable to walk. Today he can only move around in a specialised wheelchair. He lives at home in Chepstow with his mum, his dad Richard, and his carers, who provide round-the-clock support.

Sat at his bedside as Daniel spent six weeks in a coma following his accident and life-saving treatment, Michaela had already had plenty of time to consider how her son’s life had changed forever before he finally woke up.

And she recalled the heartbreaking moment the crushing news was relayed to her son.

“I knew that when he woke up, the doctors would have to tell him. How does any parent tell their child he is never going to walk again?” she said.

“The most horrendous thing in the world is to be at your son’s bedside when the doctors tell him that he is never going to walk again. We were all breaking our hearts and Daniel was the one who passed me a tissue. I just thought ‘wow’.”

Michaela and Daniel are telling their story as part of Road Safety Week, which is being run from  November 17-23 by road safety charity Brake.

The campaign is calling on all road users to look out for each other, to help stop the five deaths and 61 serious injuries that happen every day on UK roads, and particularly to protect people on foot and bike.

“I want people to know what happened to Daniel and I want other people to be safe on the roads,” added Michaela.

“Lots of people say situations like this get easier with time, but I can’t see that. I can’t see the light at the end of the tunnel because I don’t know where it is. My biggest fear is what happens when we have gone?

“No one will ever love my son as much as we love him. He gets upset that he isn’t married, or had children. We always try to keep his spirits up. But I don’t know if we have got through the hard part yet.

“It’s not just all the big things that impact on your life. He used to play golf with his dad all the time and he loved fishing. He can’t do that any more and he can’t play his bass guitar, which he loved. His life has changed forever.”

For Daniel, who was fit and regularly exercised in pursuit of his Army dream,  the accident has devastated his life.  He doesn’t hide that fact, and admits it has left him angry.

He wasn’t at fault for his accident, and was wearing reflective strips on his clothing and using LED lights on his bike at the time. It still wasn’t enough to prevent a driver hitting him though, and Daniel says that acts as a warning to others to be extra vigilant, especially through the dark winter months.

He is now looking for help to write a book around his own experiences to aid those unfortuante enough to suffer a similar fate, and will use any profits generated fund any stem cell treatment which might help him to walk as science and research progresses.

“Before this happened, I was the same as everybody else and a typical guy in my early twenties,” he said. “Now, I need help for everything. I can’t even tie my own shoelaces. I’m depressed and angry about what has happened. I feel like I have been denied a life.

“I had reflective strips on my clothing and LED lights on my bike, but it obviously wasn’t enough. I don’t want this to happen to anyone else. I don’t think it has sunk in even now to be honest.

“Writing a book is not going to change how I am, but it might hopefully help me, and others in similar situations, in the future.”

Following his accident, Daniel hit national headlines in 2013 when he donated every penny he had raised towards his own treatment – £22,000 – to six-year-old Brecon Vaughan of Mathern, Chepstow, who had cerebral palsy and needed £60,000 for pioneering treatment in the US to help him walk.

With the stem cell therapy Daniel needs still in the research and trial stages, he decided Brecon could make better use of the money, and he was right, as following successful treatment, Brecon is now able to walk unaided, but with intense physiotherapy two to three times a week.

Daniel, who still undergoes regular physiotherapy himself, was touched by the youngster’s plight and his selfless act resulted in him being awarded a Daily Mirror Pride of Britain award in 2013, presented to him by Queen lead guiarist Brian May in front of a packed celebrity audience and screened to the nation on ITV.

Daniel’s father Richard, 52, says watching his son go through this life-changing accident has taken its toll on the whole family.

“It has been life-changing, isolating and lonely,” he said. “It’s hard. Daniel used to be fit and healthy, and did all the things boys do, but in one second, that was all taken away from him.

“If the research carries on, Daniel could be walking by the time he is 40. It’s a waiting game. He hasn’t been waiting as long as some people, but even not being able to walk for a week feels like a lifetime.”

He has used that settlement to buy an adapted house and vehicle for his needs, as well as meeting the costs of round-the-clock care, which he will need for the rest of his life.

Matthew Tuff, a specialist solicitor who deals with serious injury claims on behalf of Neil Hudgell Solicitors, and secured the settlement for him, said: “Daniel’s case shows just why Brake’s Road Safety Week campaign is so important, particularly as he had taken steps to make himself visible to drivers.

“In my work I see far too many cases of serious injury being caused by accidents on the roads.

“Brake is sending out some very clear and sensible messages around drivers slowing down to 20mph in communities, looking longer and taking it slow at junctions and bends, and giving people plenty of room and consideration.

“Accidents will always happen and unfortunately there will also be cases where people sadly suffer serious and life-changing injuries, as well as fatalities.

“However, if we all take a bit greater care, from pedestrians to cyclists and motorists, we will hopefully see those numbers fall.”

Marking the launch of Road Safety Week, Julie Townsend, deputy chief executive of Brake, said: “At Brake, we witness the suffering that results, daily, through our work supporting people affected by road death and injury.

“That’s why, instead of making our streets stressful, risky places, we’re asking all road users to look out for and protect each other, particularly the most vulnerable. That means drivers sticking to 20 or below in towns and villages, looking carefully at junctions, and being considerate.

“Ultimately, we’re all just human beings trying to get around, with equal right to use the roads, not competing tribes.”

Brake is calling on all road users to look out for each other, to help stop one person every hour being killed or seriously injured while walking or cycling on UK roads. Schools, community groups and employers are this week promoting the ‘look out for each other’ message and police across the country will be stepping up traffic enforcement to deter and catch drivers putting others at risk.

Brake is urging drivers to protect people on foot and bike by slowing down to 20mph in communities, looking longer and taking it slow at junctions and bends, and giving people plenty of room and consideration.