Report reveals calls to wills and probate sector surge by 53% 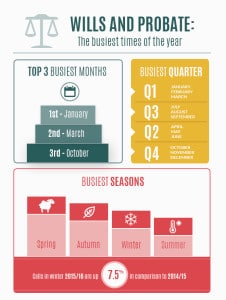 Calls to the wills and probate sector rose by 53% in the first two months of the year, according to Moneypenny.

In a like-for-like study of its wills and probate calls, the UK’s leading telephone answering specialist reported a 53% rise when the average number of calls in January and February were compared to the total number of calls in December 2015.

Bernadette Bennett, legal commercial manager at Moneypenny, said: “We typically see a rise in enquiries to the wills and probate sector during January and February. There are of course a number of reasons for this, but increased queries relating to family matters such as bereavement and relationship breakdowns were some of the key causes cited by the wills and probate specialists who we work with.

“The Christmas holidays also have an impact on the figures as many law firms are closed over this period so the number of calls they receive during December dips slightly.”

The study by Moneypenny also looked at call trends throughout the previous year. This identified the sector’s busiest periods with January, March and October respectively accounting for the months with the highest number of enquiries.

In terms of quarters, Q1 (January, February and March) saw the highest call volumes. This was closely followed by Q3 (July, August and September), Q2 (April, May and June) and Q4 (October, November and December).

A different picture emerged when looking at call volumes seasonally though. Spring (March, April and May) accounted for the largest share of calls, followed by autumn (September, October and November), winter (December, January and February) and summer (June, July and August).

The study also found that calls this winter (December 2015, January and February 2016), were 7.5% higher than calls from the same period last year.

Bernadette added: “Our call patterns typically reflect the sector as a whole so it’s interesting to see the trends that have developed over the course of a year. We will continue to monitor and analyse the data over the coming months to see if the same patterns emerge again.”

Endorsed by the Law Society, Moneypenny answers around two million legal calls a year for law firms across the UK, either on an overflow or fully outsourced basis.