A dry summer in 2013 would cost UK homeowners over £291m in damages due to shrink/swell subsidence following record rainfall in 2012, according to SearchFlow, the property search provider.

2012 was the second wettest year on record[i], with total rainfall for the year 15% higher than the annual average[ii]. If 2013 turns out to be a very dry year, there is a risk that subsidence cases could surge. Long range forecasters are already predicting a dry, hot July and August[iii].

According to the British Geological Society, the preceding two years of rainfall have a strong influence on ground saturation in any given year. Clay soils swell when saturated but when dryer weather causes evaporation these soils can shrink, crack and cause subsidence in properties.

In the ten years to 2011 there were two periods of particularly high rainfall which were followed by very dry years.

Rainfall during 2008 and 2009 was 15% and 8% above average.  This long, extended period of high rainfall was followed immediately by a dry 2010, when yearly rainfall was down 16% on the annual average.

In the dry years that followed these wet periods, subsidence claims rose by nearly a third (31%)[iv] on average. 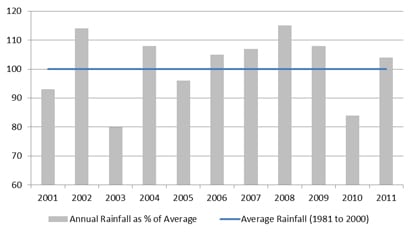 Richard Hinton, business development director of SearchFlow, said: “Heavy rainfall and ground saturation leads to swelling in the soil, particularly in areas with high levels of clay. If this is followed by a very dry spell the soil dries, shrinks and can crack. This can be a big problem for properties built on this type of soil. We’ve had a particularly wet couple of years with 2012 the second wettest on record. If the UK has a very dry summer this year it will certainly lead to a surge in subsidence issues for homeowners.”

The Cost of Subsidence

Richard Hinton, said: “Clay soil is prevalent in the North, London and the South East and properties in these areas are particularly susceptible to subsidence issues. Peace of mind is important for those hoping to buy property in these areas, especially when there has been two years of above average wet weather. Buyers should be asking their conveyancer to check the risks associated with subsidence. There’s nothing more precarious than making the biggest purchase of your life without all the facts in front of you.”

If 2013 turns out to be another wet year for the UK, the issue of subsidence could be multiplied further if 2014 is a particularly dry year.

Richard Hinton, said: “If we have another year of heavy rain, the can will simply be kicked further down the road. Further swelling of clay soils will lead to more acute shrinkage if 2014 is a dry year. Damage from subsidence costs UK homeowners more each year than flooding so owners and buyers need to be aware of the risks their properties face from the outset. Otherwise they could be sitting on a ticking time-bomb.”

For more information on any of the reports available through Searchflow, please visit www.searchflow.co.uk

[i] Figures from Property Assure

[iv] Subsidence Claim figures from the Association of British Insurers