Quill’s Lynda Rostron wins employee of the year at AGM 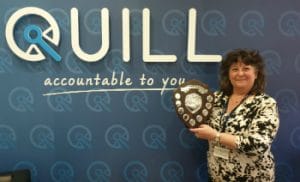 Quill awarded employee of the year at its recently held AGM to long-serving employee, Lynda Rostron. Having worked as receptionist at its Manchester head office for 21 years, Lynda symbolises both the face and voice of Quill to employees and clients alike.

Lynda is the second person to win the Peter Dye Memorial Shield, an award created in memory of one of its founding directors who passed away and which was launched at its AGM last year. The Memorial Shield’s purpose is to recognise staff members demonstrating exceptional performance and unwavering enthusiasm in the workplace.

Lynda was chosen because of her absolute devotion to Quill, not only from the perspective of long service, but also being the first to arrive each day. Another contributing factor is Lynda’s unfaltering ability to be smiling, helpful and supportive to her fellow colleagues and callers or visitors to the office.

Julian Bryan, Quill’s Managing Director, comments: “After sadly losing Peter Dye last year, it was important to ensure his legacy lived on as he made such a marked contribution to Quill. That’s why we introduced the Memorial Shield and our objective is to award it to employees displaying the same hard-working traits as his.

“Lynda is a lovely person and loyal employee. She’s staunchly dedicated to Quill and is friendly always. There’s no worthier winner. Lynda’s name has been etched onto the Memorial Shield alongside our inaugural winner and she’s been given £100-worth of Love2shop vouchers to spend at her leisure in a range of high street stores.”

Lynda states: “It came as such a surprise being announced as the winner of the Memorial Shield at our AGM in May. To me, what I do at Quill is all in a day’s work so it’s nice to know that my employer thinks otherwise and rewards what it considers is exemplary service.

“Receiving the Memorial Shield was actually a very emotional experience as I’d known Peter Dye personally for 20 years. I feel proud to have my name engraved on what to me is a prestigious trophy because it also carries Peter’s name. Of course, I look forward to spending my vouchers too.”

Quill’s renowned for employee engagement, holding ‘One to Watch’ status with Best Companies, the organisation behind the ‘Sunday Times Best Companies to Work For’ lists, and previously being voted ‘Employer of the Year’ in the Multiple Sclerosis Society Awards. Amongst Quill’s many employee engagement initiatives are bi-monthly ‘News, Views & Eats’ regional roadshows, monthly emails from the MD titled ‘JB’s Update’, and annual AGM and CPD afternoon attended by all staff.