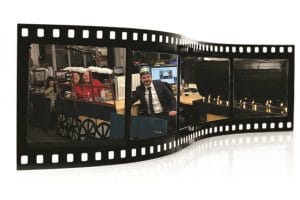 Quill’s hosted a ‘deck your desks’ Christmas decorating contest for the second year running to bring some festive cheer to its offices and encourage healthy competition between its teams to win the coveted ‘best dressed desks’ award.

With no limit on what they could do and a £30 budget to go shopping, each team chose a suitable festive theme and enthusiastically decorated their workspace in an attempt to impress the judging panel – that’s Quill’s directors Julian Bryan, Tom Wormald and Eddie Smith.

Participating teams were required to submit photos and videos of their entry. Judging criteria included creativity, festivity and use of video content.

This year’s seven entries were ‘Winter Wonderland’, ‘Welcome to Whoville’, ’12 Days of Pinpoint’, ‘Magical Woodland’, ‘Polar Express’, ‘Traditional Christmas’ and ‘Before and After Santa’s Visit’.

After much deliberation, Mark in Manchester’s team came first with its accurate re-enactment of the popular ‘Polar Express’ film complete with cardboard train. Eleanor in Liverpool’s team came second with ‘Welcome to Whoville’ as the bank of desks was transformed into a magical snowy scene. Jason in Manchester’s team came third with ’12 Days of Pinpoint’ which comprised a cardboard Christmas tree containing twelve doors, each filled with a Quill-related item representing each of the twelve days of Christmas.

Quill would like to congratulate its employees for embracing the challenge, impressing the judges with their creativity and introducing a Christmassy atmosphere firm-wide.

Inspired by Quill’s sterling efforts, one of its clients, Miles Fanning Legal Services, has decorated its own offices with an impressive makeshift gingerbread house, North Pole featuring Father Christmas as the figurehead, fireplace adorned with elves whose faces are those of employees, and lots of other Christmas decorations and ornaments.

Take a look at photos and watch the videos of some of Quill’s competition entries on its YouTube channel or Facebook page. You’ll also find photos from Miles Fanning. Visit https://www.youtube.com/channel/UCUBtiUohxqI9tcISbgJUOzQ and https://www.facebook.com/QuillPinpoint.