Quill presents over £6k to charity at lunchtime social event 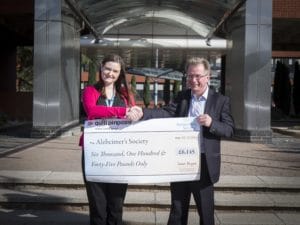 Middlesbrough-based payroll and bookkeeping bureau, Quill Pinpoint, presented a cheque for £6,145 to the Alzheimer’s Society from donations generated from its recent Hadrian’s Wall fundraiser to an official Alzheimer’s Society regional representative.

At Quill’s midday gathering on 5 October in the Wilton Centre, the Alzheimer’s Society expressed heartfelt gratitude for donated monies. Lucy King, Alzheimer’s Society community fundraiser, said: “We’re so grateful to all the staff at Quill Pinpoint for their generosity and support while completing the Hadrian’s Wall challenge. There are 850,000 people living with dementia in the UK alone with numbers predicted to rise to over two million by 2051. Alzheimer’s Society provides information and support for people with all forms of dementia as well as those who care for them.”

Julian Bryan, Quill’s managing director, commented: “The staff at Quill are dedicated to giving back to the community whichever way possible. We’re also firm believers in supporting staff with disabilities. The former has seen us donate thousands of pounds to various charities over recent years; the latter has earned us the title ‘Employer of the Year 2016’ by the Multiple Sclerosis Society.

“We chose the Alzheimer’s Society as this year’s main beneficiary because it’s a charity close to our hearts. Although Quill’s a young company – in terms of the average age of our employees – our workforce can relate to the cause because many of us have parents and grandparents with the disease which means we see for ourselves the devastating impact of this debilitating condition first hand. We’re so pleased to have raised over £6k, and we’re thankful to our employees for their impressive fundraising efforts and everyone who sponsored us on our Hadrian’s Wall walk”.