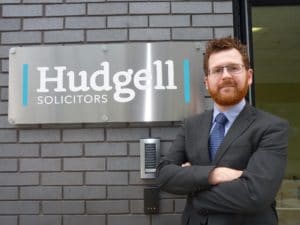 Newly qualified Chartered Legal Executive Lawyer Sam Thompson says the drive for justice is behind his passion to excel and progress in the field of medical negligence.

Sam, 30, from Hull, qualified in November after completing the Chartered Institute of Legal Executives (CILEx) qualification over three years.

CILEx is the professional body for Chartered Legal Executives and he completed his studies while working full time at Hudgell Solicitors, specialising in medical negligence.

Sam said he hopes to continue to gain experience in the specialist field before aiming high and become a judge in the long term.

“This qualification is a really important rubber-stamp for me and my firm and it means I’m professionally regulated, so my clients can be confident in my abilities as a qualified Lawyer,” he said.

“I feel as though my career is just beginning. I want to carry on working as I am, gaining more experience and working on bigger and more complex cases with the team at Hudgell Solicitors.

“Eventually, long term, I would like to become a member of the judiciary when I am eligible, which will be in about 10 years.

“Due to my interest in legal theory and jurisprudence, I have a real interest in the process of decision-making. It’s an important public service to be a judge and qualifying has opened up that opportunity.”

He later progressed to medical negligence and successfully gained a position in this specialist field at Hudgell Solicitors in October 2014. Sam has represented clients in various cases since joining the firm.

In one case, a Hospital Trust agreed to pay damages of £50,000 to a grandmother after delays in diagnosing a tumour led to her needing an emergency operation and left her with ongoing health problems which could have been avoided.

He has also worked on cases involving cancer and stroke diagnosis delays, as well as incidents in which patients have been prescribed the wrong medication due to pharmaceutical errors.

Sam said the varied nature of his job and continued support from Hudgell Solicitors throughout his studies has spurred him on.

He said: “As I have a Law degree, I was able to enrol on the Graduate Fast-track diploma offered by CILEx and I passed my exams to be admitted as a member of CILEx.

“A period of work-based learning followed this and I had to evidence everything I had done, as well as documenting why, which was then approved by CILEx to attain my qualification. I was admitted on November 4.

“I love the firm I work for and it’s an extremely professional environment, with a really strong standing in the field of medical negligence.

“I studied during lunch and from home often until late after a day in the office, while still working full time. Hudgell Solicitors have been so supportive, in particular my manager Vince Shore (a Senior Solicitor and Joint Head of Clinical Negligence).”

With an inspirational lawyer already in his family, Sam’s interested in the field began when he was a teenager, reading philosophy subjects in his own time and later legal philosophy at university.

Following his degree, he wanted to learn as he earned and build up his career – a move he says has given him a solid foundation in law.

“It gave me a really good grounding for medical negligence and I naturally progressed into medical law,” said Sam.

“When I moved to Hudgell Solicitors, that continued and I have never looked back.”