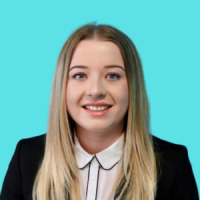 A newly qualified solicitor who joined the family firm is already a “go to” team member of Hudgell Solicitors’ expanding Civil Liberties department.

Eliza Hudgell commenced her training contract in 2020 and throughout that time has supported families at The Manchester Arena Inquiry. She has also had a placement in Clinical Negligence, one of the firm’s other areas of core expertise.

Eliza was admitted by the Solicitors Regulation Authority (SRA) on 1 February 2022.  She joined the firm as a Legal Assistant in 2017 after completing her Law degree at Hull University. She then attended BPP Law School to complete her Legal Practice Course.

Her early work involved assisting colleagues across different areas of the firm and having grown up watching her dad Neil Hudgell and the firm successfully expanding over the last 25 years, Eliza was aware what qualities were required to be a successful solicitor:

“I think a key skill in our job is to be able to listen and empathise with clients and the situation they are in, appreciating that they are turning to us at a hard time in their lives.

“I have spent over two years working on The Manchester Arena Inquiry. The strength and resilience shown by the families affected by the atrocity has been inspirational. I have felt extremely privileged to be part of the team representing them.”

Terry Wilcox, Associate Solicitor, Civil Liberties said: “Eliza has been a core team member working on The Manchester Arena Public Inquiry. She has been required by leading Counsel to produce working documents relating to complex issues of law and deal with incredibly sensitive material with empathy and compassion.

“She has developed an amazing relationship with clients and is a “go to” person when urgent tasks arise. We are collaborating with another firm, and she is well liked and respected by the wider team.”

Head of Civil Liberties, Vicky Richardson, who has been with the firm since it started, added: “Eliza is determined, efficient and reliable. Her attention to detail is second to none and she has a genuine empathy towards those she is helping.  An outstanding talent and certainly one to watch.”

Eliza’s qualifying comes a year after Hudgell Solicitors announced a new scheme to enable six new trainee solicitors to earn and learn – benefitting from accruing a period of recognised training alongside their studies.

Chief executive at Hudgell Solicitors Rachel Di Clemente said: “Giving our trainees the chance to work on some of our high-profile cases can only benefit them going forward.

“We are all really proud of Eliza and congratulate her for completing her training contract to become a solicitor in our Civil Liberties team. She has certainly set the bar for other trainees and will be a very hard act to follow; she’s a star in the making.”

Alongside Eliza’s work with the Manchester Arena Inquiry, she has helped our clients raise money for the Swan Bereavement Nurses who were invaluable for them at the time of the attack. She has also taken part in various activities to raise money for Martin’s Mountain.

Martin suffered life-changing injuries as a result of the Manchester Arena Attack and has set the challenge of Climbing Mount Kilimanjaro. Eliza has been inspired by Martin and hopes to be involved in further activities and fundraisers.

Eliza has also begun assisting on the Post Office Horizon Scandal bringing claims for Malicious Prosecution, continuing the work of Neil Hudgell, who has called the scandal, “the biggest miscarriage of justice in UK history.”

Eliza says assisting with the claims of former sub postmasters is a continuation of the firm’s principles: “I have always been very proud of what my dad has achieved. He has taught me, and continues to teach me, the importance of client care and being there for those who have turned to us at a difficult time.

“I hope my work continues to demonstrate his, and the firm’s, core values by putting our clients at the centre of what we do. If I can go on to achieve half of his accomplishments, I will be very honoured.”