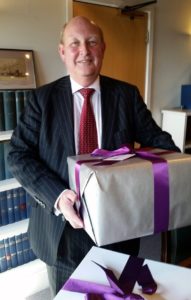 Each quarter tmgroup asks conveyancers an industry-related question at legal conferences and exhibitions and, throughout January to March, tmgroup asked conveyancers: “When was the last time your firm increased your conveyancing fees?” [3]

Although there was no ‘right answer’, all respondents were put into a draw with the winner chosen at random in April.

Featuring an iPad, a Fitbit, Bosch coffee machine and some other high-tech goodies, the prize bundle was presented to Mr Meakin (pictured) by tmgroup’s southern area manager Nick Ball.

“I am a complete technophobe but hopefully will be inspired by the iPad to become less so. It is a rather smart machine. I think the wristband heart monitor might be something to avoid as if I looked at it when I play squash (which I do regularly) I might be rather alarmed. Time to go and make a cup of coffee! Thank you again.”

“We really look forward to getting to meet with our customers face-to-face at industry events and hope to see many more at exhibitions and sessions over the coming weeks and months.”

Look out for tmgroup at LegalEx and Professional conferences across the country and you could be in with a chance of winning the Q2 prize bundle!