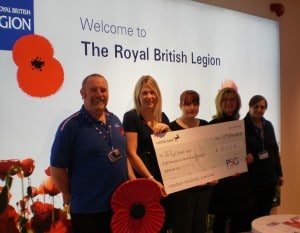 PSG delighted to have raised almost £9,000

Property Search Group [2] (PSG) decided that they wanted to mark the Centenary this year by doing something special to raise funds for the poppy appeal. They of course decided to walk 100 miles to commemorate 100 years since the First World War.

The companies’ head office is in Barnsley and they have developed into a nationally recognised brand and market leader in search provision. Samantha Horn, head of support services and Kelly Wooldridge, marketing manager took the lead in organising a successful fundraising event for colleagues and franchisees to get involved with.

The event took place on Saturday 13 September at 4 locations across the UK. A total of 4 walks were organised, each comprising of a lengthy 25 miles. The walks took place at Hadrians Wall, North Downs Way, Derbyshire Dales and then a final one from Tavistock to Plymouth. In total PSG walked 100 miles – one mile to commemorate each year since the First World War.

Andrea Glover, managing director of PSG said: “Each year we hold a charity event to raise funds and more often than not awareness for a worthy cause. As 2014 marks a very special anniversary in our country’s history, we thought it only right that our event this year recognised the invaluable work that the Royal British Legion do in providing support for our servicemen and women past and present.

“Walking 100 miles is nothing in comparison to the sacrifices made by our armed forces but we are very proud to have worked together with PSG teams from around the country to give a little bit back to this fantastic organisation”.

PSG visited The Royal British Legion’s pop-in centre on Monday 10 November to learn more about the work of the Legion and of course hand over the cheque! Samantha Horn, Kelly Wooldridge and Denise Morgan, a franchisee of PSG were delighted to meet Mick Woosnam one of our beneficiaries.

Mick is a 69 year old widowed father of three who served for 17 years in the Army. Following his service, Mick developed health problems and needed help to purchase furniture for his newly adapted bungalow as his existing furniture was too big.

When just 3 days later Mick’s wife passed away his world was turned upside down and the Legion took over. They ensured he received the furniture he needed together with some food vouchers as he couldn’t afford the essentials.

Mick said: “I’m so incredibly grateful to the Legion for helping me during this very difficult time. My wife died suddenly and I just couldn’t think rationally, but the Legion took over and looked after everything which gave me great peace of mind”.

PSG then announced that they had managed to raise an incredible £8,628 for The Royal British Legion’s Poppy Appeal which will go a huge way to supporting a number of beneficiaries. Mia Senior from The Royal British Legion said “we are amazed that PSG have managed to raise such an incredible amount of money and would like to say a massive thank you to everyone who got involved in this fantastic fundraising event.”