Productivity levels in the conveyancing market have soared, rising by 69% in just four years from 71 cases per year in 2012 to 120 cases per year in 2016. With cases continuing to rise but the number of conveyancers falling, those who remain are faced with an ever-increasing workload and are being forced to find more ways to work smarter.

The latest Conveyancing Productivity Index shows that between 2015 and 2016 alone, the annual number of cases per conveyancer increased by 10%, with conveyancers now completing 10 more cases year-on-year.

The Index – published by Search Acumen, the conveyancing search provider – measures the industry average for completed transactions per conveyancer and how this is evolving over time. It shows conveyancers are now completing an extra case per week on average, increasing from 1.4 cases in 2012 to 2.3 in 2016.

With an increased caseload, conveyancers have had to become much more efficient and are now working at a faster pace, spending a day and a half less on each case than they were in 2012. Over the course of a working year, practitioners now complete a transaction every 2.1 days on average, down from 3.6 days back in 2012.

The ongoing pressures of less time and more work underscore the importance for firms to operate as efficiently as possible, and ensure they are implementing the right technology and work processes to deliver volumes while meeting clients’ expectations for high standards of service. 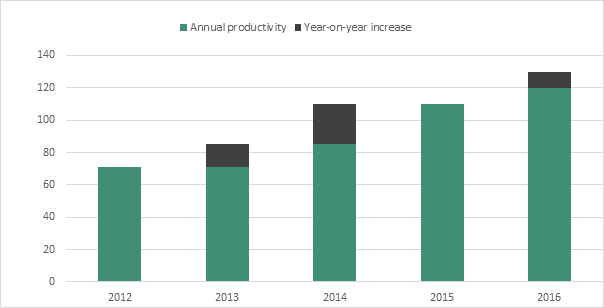 Conveyancers drop out of the market while transactions rise

Between 2015 and 2016 the increase was more modest, but still significant at 5%, influenced by the stamp duty reforms of April 2016. This saw many landlords and second home owners rush to complete transactions ahead of the changes, putting severe pressure on the workloads of conveyancers.

Graph 2: Number of conveyancers versus combined sales and purchase transactions, 2012-2016

“Conveyancers are doing more than their fair share when it comes to addressing the UK’s ‘productivity puzzle’. With a remarkable uplift of nearly 70% in their output over just four years, there is no doubt that conveyancers are working harder than ever before for UK home buyers.

“But many conveyancers are also feeling the pressure. They are facing a significantly demanding workload at a time when advances in technology are ramping up consumers’ expectations of the service they will receive. To put it simply, there is more work to be done but fewer conveyancers to work on it. This is a concern because ultimately it’s homebuyers who will suffer.

“With their time at such a premium, conveyancers need to ensure that they’re not involved in a race to the bottom, sacrificing quality to handle the quantity of cases they are facing. Harnessing technology is a vital part of achieving this balance, by enabling conveyancers to meet this growing demand while ensuring they’re not compromising the quality of their work and don’t fall victim to avoidable delays.”