Pace of consolidation in conveyancing market trebles in 2015

The total number of conveyancing firms operating in the market declined at the fastest rate in three years during 2015, according to the year-end edition of the Conveyancing Market Tracker from Search Acumen, the search provider.

The Tracker – which uses Land Registry data to examine competitive pressures in the conveyancing market – showed the number of active firms who recorded transactions dropped by 9% in 2015: three times the 3% annual rate of decline seen in 2013 and 2014.

Graph 1: Firms exiting the market versus pace of exit 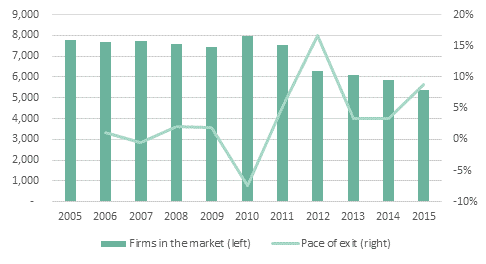 The 9% drop equates to more than 500 firms, as mergers and exits continue to reshape the competitive landscape. Search Acumen’s analysis suggests the number of conveyancing firms currently operating in the market is now 30% lower than the 7,779 firms that recorded transactions during 2005.

However, while the average firm operating in the market appeared to benefit from a smaller number of competing firms, the 10% annual gains are the lowest seen in four years. In comparison, the average firm recorded 33% annual growth in transactions during 2014, 15% in 2013 and 40% in 2012 as the market rebounded from the recession.

The market share of the top 1,000 ranking firms crept up to 71% in 2015, one percent higher than the 70% share secured in 2014 to the highest since records began in 2005. Ten years ago, the 1,000 biggest firms accounted for a comparatively small 55% of conveyancing transactions.

Within the top 1,000 firms, those ranked in the top five positions saw their average annual transactions dip 5% from 2014; while the top ten collectively saw annual volumes drop 10%.

Those ‘challenger’ firms ranked 21-50th and 51-100th fared better with 5% average growth, but this was bettered by the average 8% annual growth recorded by firms outside the top 1,000.

Direct enquiries and personal referrals were the most common source of business growth by conveyancing firms during 2015, with 70% of firms questioned by Search Acumen reporting a rise in business from this channel. This includes one in five (21%) that experienced a significant increase.

Looking ahead, nearly three in four (72%) conveyancers identify staff recruitment and training as the biggest hurdle for them to overcome in order to achieve further growth in 2016.

“The trend in market consolidation continued in 2015 with the dropout rate of 9% three times higher than the 3% seen in 2013 and 2014. Despite more conveyancers leaving the market, transaction volumes grew only slightly in comparison to growth in a very buoyant 2014.

“In fact, the average firm saw its transaction volumes grow at the slowest rate since 2012. This was the year when the property market was still coming out of the post-recession doldrums – and therefore a very low benchmark. Growth in the upper echelons was also muted despite the top 1,000 gaining market share.

“The importance of referrals and direct enquiries as a source of new business should help to focus minds on the priorities for 2016. There is no room for a laid-back expectation that introducer-driven guaranteed business from sources like estate agents will simply keep coming through the door.

“The more that firms can do to meet and exceed expectations with the service to existing clients, the better chance they have of benefiting from this trend.”