The EU referendum result in June 2016 means that the Government has to spend considerable time making preparations for leaving the EU at the expense of domestic policy making. This time constraint was compounded following the announcement of a snap general election in April 2017.

The Government’s legislative process has been temporarily suspended in four different ‘purdah’ periods since the start of 2014.

The figures relate to business-related statutes and statutory instruments and include laws relating to financial regulation, intellectual property and taxation, for example.

A number of EU-derived laws were still passed last year

Despite the overall fall in the number of new laws, some major EU-derived business-related laws were passed last year – much of it relating to financial regulation and taxation, including:

The UK has introduced a total of 707 new laws that originated from Brussels since the EU referendum last June. The new laws add to the current list of approximately 19,000 EU laws Government legislators will need to consider as the UK negotiates the terms under which it will leave the EU.

The tailing-off of business-related legislation could be seen by some businesses as a welcome respite, but others will see some of the new legislation as essential reforms. 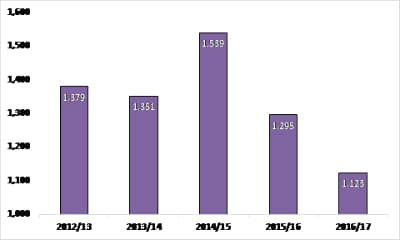 Joanna Morris, director of commissioning at Thomson Reuters Practical Law, said: “A great deal of ministerial time has been required for the ongoing Brexit negotiations and parliamentary time has also been cut as a result of this year’s snap election. Fewer sitting days means less legislation enacted.

“In addition, there may be an effect from the lack of a working government majority since early June – fewer pieces of legislation are being presented and are taking longer to debate and enact.

“That said, EU legislation continues to be implemented in the usual way, much of it affecting financial services”.