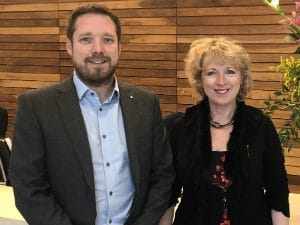 Hudgell Solicitors’ [1] chief executive Amanda Stevens has revealed plans to expand the firm’s work into the North West of England in 2019.

Established in 1997 in Hull, East Yorkshire, the firm now has offices in Leeds and London and has added teams of legal specialists in travel litigation and civil liberties to its established clinical negligence and personal injury departments.

Now, Mrs Stevens says it is the ‘ideal time for a fresh new legal face in the North West’ as she outlined ambitious plans for 2019.

“Moving into the North West has been part of our long term plans for some time, and now we feel the time is right,” said Mrs Stevens.

“We have demonstrated in recent years that we have a very successful business model at Hudgell Solicitors which enables us to move into new areas of the country and quickly establish ourselves in the market.

“There remains a constantly changing picture across the injury claims market, with many firms again considering their futures as they enter another new year in the face of continued pressures and new legislation.

“We have a well-known and respected track record of purchasing caseloads from other firms looking to exit the injury market, and that could be an option for us again across the North West.”

Much of Hudgell Solicitors’ growth in recent years has come from its ‘webuyanyfiles.com’ initiative. Launched seven years ago, it has seen the firm complete more than 30 deals worth more than £7.5 million when taking over cases from firms ending their injury work.

The North West business will be run from a new office in the 13-storey St Peter’s Square complex in Manchester city centre, where Hudgell Solicitors has secured a legal aid franchise for representing people in claims against public authorities.

“We believe we have the recipe for success and see the North West as an area where we can make an impact. It is time for a fresh new legal face in the region,” added Mrs Stevens.

“We are delighted to be able to offer legal aid to people in cases against public authorities. This area of work has been an increasing focus for our business in recent years though our growing Civil Liberties department, representing people in cases relating to issues such as police misconduct, inquests and human rights.”

The new Manchester office is being managed by Senior Solicitor and Head of Travel Litigation Paul McClorry, who himself has overseen a growing department supporting people who suffer serious injuries abroad.

“Our teams already have significant workloads in Manchester and the surrounding areas such as Salford, Oldham, Stockport, Bolton and Wigan, which have developed organically out of our current offices,” added Mrs Stevens.

“We have also been involved in cases such as working pro bono for victims of the Manchester bombing in 2017, so we are not entirely new to the region and have good experience of the area.

“Opening a dedicated city centre office, in a landmark building, and having staff based in Manchester, has been a natural step for us to ensure we can serve the wider region.”

The recently published 2018 Legal 500 guide described Hudgell Solicitors as ‘firmly established as a national leader’, adding that it is ‘acknowledged for its expertise in personal injury cases involving brain, spinal and other injuries sustained in road accidents, during medical care or in the workplace’.

Over the past two years the firm has become nationally recognised for its work in representing people in claims against state bodies, including actions against police forces for deaths in custody, police misconduct, wrongful arrests and breaches of civil liberties.

It is currently handling a number of cases of national significance across its departments including representing the families of four men who were victims of serial killer Stephen Port as questions are asked of the Metropolitan Police over failings in investigations.

Its Civil Liberties team is also representing the family of former Welsh Cabinet Secretary, Carl Sargeant as an inquest continues into his death, as well as representing survivors, families and victims at the ongoing Grenfell Tower inquiry, and core participants of the national Infected Blood inquiry.