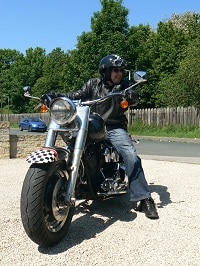 A motorcyclist from Liversedge, West Yorks, who suffered a life-changing brain injury when he was knocked off his bike, has spoken out about his recovery to promote road safety.

Richard Woodyet, and personal injury expert from national law firm Irwin Mitchell, Carolyn Heaton, are speaking out about the horrific collision as part of Brake’s Road Safety Week, which runs from the 21-27 November.

Motorcyclist Richard, known to his friends as ‘Woody’, was on his way to deliver a birthday card to his Aunt in November 2012, when a van pulled out onto the dual carriageway in front of him causing an inevitable collision.

Woody, who lives with his wife Kay, suffered a traumatic brain injury and multiple fractures, and was airlifted to Leeds General Infirmary.

The father-of-two has no recollection of the collision or the two weeks that followed.

When he was able to go back home, Kay helped Woody recover from his injuries, but whilst his broken bones healed, the effects of his brain injury remained.

Woody, who worked as a driving instructor and who was saving a retirement fund by renovating and renting out properties with Kay,  suffered difficulties with his memory, concentration, fatigue and emotional difficulties, including anger, irritability and tearfulness.

Following the collision, Woody tried to return to his job as a driving instructor but struggled with this and he also now needs help to renovate and manage his properties.

The couple approached Carolyn Heaton, a partner in Irwin Mitchell’s Leeds-based serious injury team, to help them secure funding for Woody’s on-going rehabilitation needs and to recoup the financial losses they incurred.

In May 2016 Woody’s legal team negotiated a favourable settlement for Woody ensuring his care needs continue to be met and to cover some of the commercial costs of renovating properties for Woody and his wife to manage in their retirement.

Carolyn said: “Woody has made a positive recovery from what was a very serious injury. He is making significant progress in relation to his difficulties and it is hoped that he and his family can now move on with their lives. Woody now has funds to pay for the future case management and therapy that he may require and to help him pursue his goals in relation to his property business.

“We fully support Brake’s Road Safety Week to raise awareness of the six pledges for safe driving. Agreeing to these pledges can make the difference between life and death, as most road traffic collisions are preventable.”

Woody said: “You never think that something like this will happen to you, and then it does and it turns your life upside down. I hope drivers will remember to keep their eyes open and pay extra attention to the road, so that as few people as possible have to suffer like me and my family have, as a result of my injuries.”

Woody’s story is being shared ahead of charity Brake’s Road Safety Awareness Week (21-27 November) to highlight the importance of staying sharp on the road.

Five people are killed every single day by road traffic collision in Great Britain. Breaking the speed limit or travelling too fast for the conditions accounts to more than one in five fatal crashes, according to Department for Transport 2015.

Irwin Mitchell’s #SaferJourneys campaign is dedicated to raising awareness of road safety. They have created an A-Z guide to promote safer journeys for winter months which encourages families, children, and cyclists to wear bright clothing in the dark nights and more.