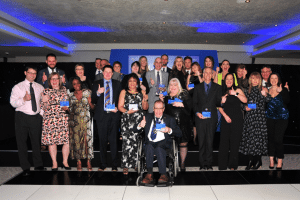 The 2019 winners of the Local Land Charges Awards for Excellence with the Coal Authority, LLCI, SearchFlow and NLIS who sponsor the Awards

Since their launch in 2008, the annual Local Land Charges Awards for Excellence, are the only national awards celebrating the achievements and successes of Local Authority Local Land Charges departments across England and Wales during the past year.

This year’s shortlist is made up of 54 local authority teams and 9 individuals who have all demonstrated excellence, enthusiasm and willingness to adapt and improve in a tough and uncertain market.

The sponsors and judging panel are chosen for their independence, expertise and objectivity. The winners and those highly commended in each category will be announced at an awards dinner on 2nd March 2020 in Birmingham, around 150 local authorities are expected to attend.

Jan Boothroyd, Chief Executive of Land Data, comments: “The purpose of our Local Land Charges Awards for Excellence is to encourage and highlight best practice and excellence in Local Land Charges across England and Wales. I’d like to thank the judging panel and everyone who has entered or submitted a nomination for an award.  We’ve enjoyed reading the positive comments from solicitors who applaud those local authorities going above and beyond to deliver an excellent customer service, as well as noting the detail behind the digital data projects being carried out alongside the day to day work in local authorities. These projects will help transform local land charges and other service areas, by enhancing digital service delivery over the years to come.”

The LLC Team at Royal Borough of Kensington & Chelsea