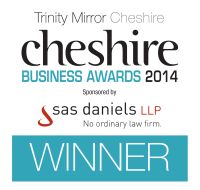 With Granada’s Lucy Meacock as host, the ceremony got off to a flying start with the team at Lawyer Checker winning the first award of the night.

Presenting the award to Chris Harris, MD, was Chester and Cheshire West Councillor Stuart Parker. Mr Parker was proud to be awarding Lawyer Checker with the business start up award sponsored by the Council and Blue Orchid.

He stated: “Bringing new business to the region is important, ensuring that talent across the region is harnessed. Facing fierce competition from the other nominees; Lawyer Checker demonstrated phenomenal growth in a conservative industry and during tough economic times.”

From a cold start-up in 2012, Lawyer Checker is now becoming increasingly recognised nationally as a driving force in the fight against vendor conveyancer fraud its system having prevented over £750k in attempted frauds.

The panel of judges, which amongst many included leaders from the Cheshire legal industry, were told that in the year January 2013 to January 2014 the turnover for the business increased tenfold, with acclaim from lenders like Santander who welcome such a product to the market place.

“Trinity Mirror Cheshire was exceptionally proud to host to our annual Business Awards once again and be able to salute both the companies and the people who have helped increase prosperity and confidence in the Cheshire region.

“The award nominations for 2014 were of the highest quality with some very deserving winners announced on the night. Every finalist and winner should be very proud of their achievements and to be able to receive their recognition at Chester Cathedral made the evening even more special.”

Chris Harris MD, was pleased that the business and team have been recognised within the region.

“Starting a business in an economic downturn was a challenge, but the threat of fraud within the legal market place was becoming increasingly prevalent and no more so than within the conveyancing sector.

“Earlier this year the SRA recognised that there is a significant threat to law firms and conveyancers who can have their identity stolen from criminals who are after mortgage funds and house property purchase cash. I am proud to say that in less than two years the business has more than tripled in every sense, really putting the issue of vendor conveyancer fraud on the map.”

So far this year, and at the time of writing, there have been 143 scam alerts published by the SRA.

Over 400 law firms have recognised this threat; already using the service implementing it into their risk regimen when conducting conveyancing transactions. During the last quarter business turnover has increased by 40% demonstrating that more and more conveyancers are recognising the benefit of conducting a Lawyer Checker search on residential transactions in order to adhere to Rule 10 and protect client money.

Find out more about this award winning company and its service www.lawyerchecker.co.uk