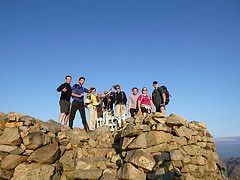 LawNet members have been hitting new heights in the past few weeks.

But it’s not the latest legal hotlist where they have been showing their prowess this time, instead they’ve been raising money for charity, by conquering no less than nine challenging mountain peaks across the country.

First, 67 brave-hearted hikers, from member firms across the country, took part in the Six Peaks Challenge in the Lake District, facing high winds as they ascended to 5800 feet, in a 14 mile trek, which saw the first home arriving in well under 8 hours.

And just one month later, nine of the walkers set out on an even bigger challenge – to tackle the national Three Peaks Challenge, scaling over 11,000 feet by ascending Snowdon in Wales, Scafell Pike in the Lake District and Ben Nevis in Scotland in less than 24 hours.  The first team members made it in just 23 hours and 5 minutes, with all of the team successfully completing within the 24 hour window.

So far, almost £6,000 has been raised by the challenges, as part of LawNet’s ‘Challenge25’ raising money for Marie Curie, Midlands Air Ambulance and NSPCC to mark the network’s 25th anniversary.

“Conditions can change in an instant on the mountainside, and unpredictable weather coupled with the challenge of walking in pitch black on Ben Nevis, our last peak, certainly proved to be one of the toughest elements of a very trying, yet satisfying 24 hours for our extreme Three Peaks Challenge,” said George Coombes, LawNet’s marketing & services manager, who organises the annual challenge for the 67-strong membership of independent firms.   Previous events have included the Yorkshire Three Peaks Challenge and Striding Edge to Helvellyn.

Each of the challenges is overseen by a support team of mountaineering experts, although the next challenge on the agenda is more likely to demand the services of a professional diver, as a team of head office LawNet staff will be taking on the Winter Wolf Run in November, a 10k multi-terrain assault course with ice cold lakes, muddy forests and other energy-zapping obstacles.

LawNet chief executive Chris Marston added:  “It’s great to see the determination and enthusiasm of the members taking part and I’m looking forward to watching from the sidelines when the LawNet team face up to the Wolf Run next month.”

To support their challenge, visit the JustGiving page: http://bit.ly/1xkYvfd

Extreme Challenge Team Members on Scafell Pike, the second peak of the day (left to right):