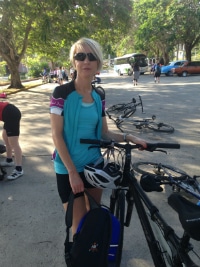 A prolific fundraiser from Little Neston is preparing for her toughest challenge yet as she gets ready to take on a gruelling 400-mile bike trek across Brazil.

Helen Watson, partner and head of employment law at Chester-based legal firm Aaron & Partners, will ride across rugged terrain in temperatures of up to 30 degrees in a bid to raise thousands of pounds for charity.

The legal expert, who is also chair of the Institute of Directors North Wales, will be joined by a group of 40 other women for the six-day challenge in September, where she expects to be cycling for between 11-12 hours a day.

Helen said: “I’m working really hard at the moment with my training to prepare for this challenge and I’m under no illusions how difficult it will be.

“I’ve completed a couple of long bike rides in the past but I think this will be my toughest challenge yet, simply because of the heat and the difficult terrain we’ll have to contend with.

“Even though I know it will be hard work, I can’t wait to get on my bike and get started. This kind of challenge is a wonderful way to see the world and the most important thing is that this provides such a great opportunity to raise as much money as possible for our chosen charities.”

Helen’s upcoming challenge follows on from several marathons, half marathons and other bike treks in recent years, which have seen her cycle across India, Cuba, Vietnam and Cambodia.

She first embarked on her fundraising efforts for Women V Cancer in memory of a close friend who died from ovarian cancer back in 2011. Claire House Hospice also benefits from Helen’s endeavours and she’s supported the charity for more than ten years as a long-standing board member and latterly Chairman.

Helen added: “Women V Cancer is an amazing charity that’s particularly close to my heart after the loss of my friend. Claire House Hospice too, has helped several people I’m close to. These are both wonderful charities and I hope my fundraising efforts will go some way to enabling them to carry on and develop their amazing work.”

A special charity cocktail and casino night with live music has been organised by Helen at Inglewood Manor on September 15 to help raise money for Claire House Hospice and Women V Cancer. For more information, email Judith.Kenyon@jaykayevents.co.uk.

To sponsor Helen directly before her challenge gets underway at the end of September, visit her Just Giving page: https://www.justgiving.com/fundraising/helen-watson35.