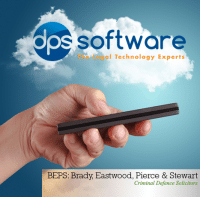 Joe Bloggs, age 35, of South London had been charged and detained under arrest by Police at Plumstead Police Station. Something didn’t seem quite right to Joe’s defence lawyers Brady, Eastwood, Pierce and Stewart (BEPS) when the Crown Prosecution Service produced his previous convictions when he was being dealt with by the Virtual Court. His solicitor had a hunch the ‘previous’ produced by the CPS was not right so he took to his iPhone and looked it all up himself using his mobile technology and his firm’s case management software.

Within moments he had found the full case history, the relevant documents, knew precisely what had happened when his client appeared in court on the previous occasions and critically proved it to the Judge and CPS. They showed that the charges being made against Mr Bloggs were totally incorrect leading to his release – job done – justice done – happy client – no fuss.

BEPS are long time users of case management technology from and have always been ahead of the curve in using management tools to make their staff’s and their clients’ lives easier.

Thanks to their DPS they have information immediately available whether they are at police stations or at virtual courts; if they need information fast they can get it. Solicitors cannot be reliant or dependent on what the CPS or any other side tell them, they need to know that they agree with the information for their client’s sake, their professional integrity and of course Justice.

Scott Ridley, the Technical Director of DPS Software commented “Software has its human side. It is always immensely satisfying for us to see technology put to use to benefit people in every way and in this case, it helped Justice to be done. It simply does not get better than that.”

Please note that the client’s name has been changed to honour solicitor – client confidentiality.