Is the UK on a slippery slope with Sinkholes?

The occurrence of sinkholes in the UK is becoming more and more frequent, and the data suggest that this trend will continue.

In early 2014, after a particularly wet winter, scientists recorded a five-fold increase in the amount of sinkholes appearing around the UK. Fast forward to present day, and after a winter of record rainfall, we are starting to see sinkholes hit the headlines once again.

There are two main classifications of sinkholes, natural and man-made. Natural sinkholes occur when water gradually dissolves soluble layers of bedrock, which then form cavities underground. Once the cavity can no longer support the material at ground level, it caves in to form the sinkhole.

Man-made sinkholes, also known as crown holes, are caused by the remanence of abandoned mines and underground sewage works. When water drains into these voids, it can destabilise the roof, and cause it to collapse in on itself.

Even though it is near impossible to predict the location and timing of sinkholes, there are areas of the UK that could be more susceptible than others. Areas where more soluble rock such as chalk, limestone or salt rock are present are going to be prone to sinkholes as these materials dissolve the fastest.

Due to the national shortage of homes, we are currently seeing a drive in house building. This means that housing developments are being built on land that is previously untested in terms of ground stability. When building infrastructure, the path that surface water takes to drain away can be affected, and this can be a potential trigger for sinkholes.

The UK has seen a number sinkholes in the past few months, varying in size and location. The most devastating appeared on the main road into Manchester city centre. The 40ft crater, has caused major disruptions for six months now, and is estimated to cost £6m to fix, with the reopening of the road scheduled for May 2016.

There have also been incidents involving residential properties. One homeowner in Kent awoke to find a 10ft wide sinkhole had swallowed part of her front garden, including an 8ft tree. The sinkhole is believed to have been caused by a burst water main, but the full extent of the damage is yet to be investigated.

We have also seen examples from around the world where sinkholes have caused direct damage to properties. The latest comes from Nordhausen, Germany, where a sinkhole measuring 40-50 meters deep ripped apart two residential properties. A stark reminder to the possible damage sinkholes can cause.

As part of Future Climate Info’s suite of Environmental Reports, a Ground Stability module is included in all Standard and Premium reports. This module provides an analysis of all relevant data sets, and provides a Professional Opinion on the impact of the property value (if any) relating to Ground Stability information from Wilbourn & Co. Ltd Chartered Environmental Surveyors. 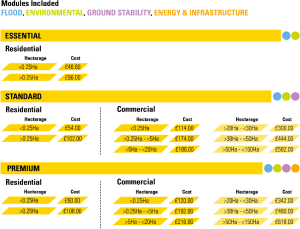