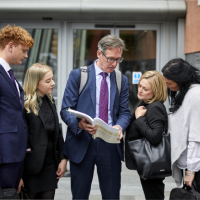 Hudgell Solicitors is building on three years of success in the north-west by increasing its team and office space in Manchester.

The move follows continued growth in client numbers since moving into the city in the summer of 2018 for both its Travel Litigation and Civil Liberties departments.

Now, Chief Executive Rachel Di Clemente has revealed the firm is currently recruiting for a number of experienced solicitors to grow its serious injury team, which will now also operate from its Manchester base at 1 St Peter’s Square, as well as its head office in Hull.

A second office space in the building complex has also been acquired to accommodate the increasing north-west team.

Coming just a month after the firm chose to streamline its services based in London, Mrs Di Clemente says the continuing growth of its Manchester office is evidence of it investing around two main ‘operational hubs’ in the north.

“As a business we’re still completely committed to investment, recruitment and growth, and increasing our offering from Manchester is our next step,” she said.

“We recently took a considered decision to base our core work out of two operational office hubs, which are at our headquarters in Hull and in this office in Manchester, where we have built an established reputation over the past three years, growing our work substantially in travel litigation and civil liberties.

“We believe there is now a good opportunity for us to expand our work in personal injury and clinical negligence representation in the north-west, complementing the excellent, long-established team we have in Hull, providing seriously injured people with first rate legal support and access to the best rehabilitation.

“Last year we also appointed Eve Carter to head up our Court of Protection team from Manchester and this will be a valuable support to our growing serious injury team.”

Firm has represented families of victims at Manchester Arena inquiry

As part of the continued development of the Manchester team, travel litigation solicitor Tracy Stansfield has been promoted to the role of ‘Associate’.

It will see her provide support to the Manchester office manager and Head of Travel Litigation Paul McClorry, a Legal 500 and Chambers guide listed lawyer, in managing the growing office and travel team.

The department has established a reputation for its industry-leading ability in handling the most complex of claims for those who suffer serious injury abroad, representing hundreds of clients a year.

The Manchester-based Civil Liberties team, led by experienced inquests and inquiries specialist solicitor Terry Wilcox, has represented the families of victims at the Manchester Arena Inquiry since it started last September, from which Chairman Sir John Saunders published his first volume of findings and recommendations last month.

Mr McClorry added “In a short space of time we have gone from being new in the market in Manchester to being recognised and respected for the success we have had and the significance of the work we undertake. It is the perfect time to build on the solid foundations which have been laid.”