The findings of a survey into how well supported parents feel throughout pregnancy and birth by health professionals – commissioned by Hudgell Solicitors – has been shared with delegates at the National Maternity Safety Conference.

Hudgell Solicitors, as joint headline sponsors of the conference for a second year, was represented by three solicitors and its in-house midwife specialist at the event organised by Baby Lifeline, the campaigning mother and baby charity. 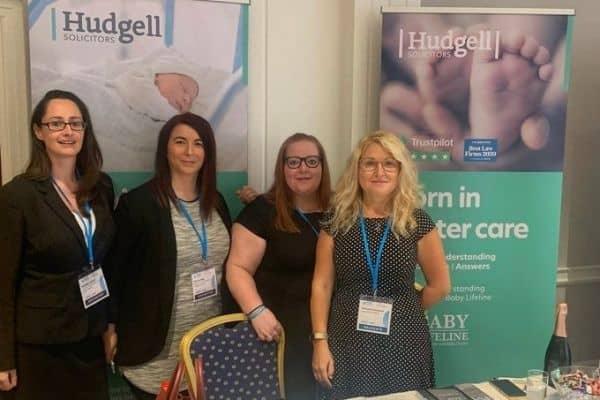 The conference brought together maternity professionals, system leaders, subject specialists, patients and families to present the latest evidence on the safety of maternity care today, share examples of positive improvement and best practice and hear from senior leaders about the next steps in the national maternity safety programme.

It served to bring greater awareness to safer maternity care, with one of the key themes emerging being the importance of working together.

Professor James Walker, Clinical Director in Maternity of the Healthcare Safety Investigation Branch (HSIB), one of the many expert speakers on the day, remarked: “No one group can solve all the problems. We have to work together to implement change.” And solicitor Ms Dale commented on the day: “In agreement with this message of working together and listening to everyone involved to achieve safe births not ‘good’ births.”

Ms Greenwood – an experienced midwife and former NHS incident investigator who joined Hudgells in March to further enhance its in-house medical expertise when handling serious clinical negligence claims – was on hand at the conference with her colleagues at the Hudgells stand to speak with fellow healthcare professionals, discussing experiences and highlighting its own birth injury survey.

The team at Hudgells are passionate about improving maternity care for all as it supports many clients following a traumatic birth who say they felt their concerns during pregnancy fell on deaf ears, or were too easily dismissed. For this reason, it commissioned a birth injury survey, as a joint piece of research with Baby Lifeline, in the lead up to the conference.

Hudgells started by asking the view of mothers and partners by commissioning a YouGov survey in July, which questioned more than 2,000 parents on their experiences of their last pregnancy.

What were the key findings of concern from the Hudgell Solicitors birth survey?

Download the results of our Birth Injury Survey 2021 here.

Midwives were then invited to fill in the survey at the conference in Birmingham as part of the second phase of its research.

Ms Page, one of the three solicitors attending the conference from Hudgells, said: “As a solicitor who supports families through birth injuries and losses, the differing care between the various trusts is very frustrating and appears to come from a lack of standardised training and funding.

“When things go wrong, this can have a devastating impact on families. Baby Lifeline and the National Maternity Safety Conference highlight these issues, giving all involved in the process an opportunity for reflection and improvement.

“My own recent experiences in maternity care reflect that of the survey and with campaigns by charities such as Baby Lifeline it is hoped improvements can be achieved.”

Charlotte Bevan, Senior Research and Prevention Advisor at the charity Sands, gave a talk in which she said: “The parents have to be at the heart of the story, it’s their narrative. When parents are engaged early on you avoid escalation either to a complaint or litigation because most parents just want answers and an apology.”

Hudgells’ backing of the conference was part of its continued support of organisations like Baby Lifeline in raising awareness around the need to continually improve maternity care through training and development, and by ensuring lessons are learned from mistakes.

The firm has a longstanding relationship with Baby Lifeline, having previously backed its ‘Monitoring for Mums’ campaign, taken a petition to Prime Minister Boris Johnson to call for the Government to reinstate the Maternity Training Fund, and supported its calls for standardised maternity training across the UK.

And Ms Tebbutt, the third of its medical negligence solicitors present, concluded: “We had a fantastic day at the National Maternity Safety Conference.

“It was very educational and eye-opening, whether that talk was by an MP, a patient or one of those on the maternity front line. It was a privilege to attend.”