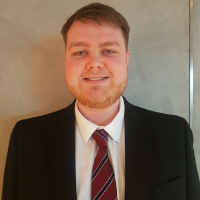 A newly qualified solicitor who started his training contract “in the same bedroom where I revised for my GCSEs” has hailed the “clear vision” of Hudgell Solicitors on progressing early legal careers at the law firm.

Dan Macmillan commenced his training solicitor contract at the company in April 2020 during the first Covid-19 national lockdown and was admitted as a solicitor by the Solicitors Regulation Authority (SRA) on October 4.

Training contracts usually last two years, but Dan managed to complete his in 18 months due to the eight months prior he spent assisting the Criminal Injuries Compensation Authority (CICA) team when he first joined the firm in early 2018.

During the course of his training contract, the University of Hull law graduate had to keep up-to-date training records and a description of all the work he did that was relevant to the SRA practice skills standards in areas including negotiation, advocacy and communication.

He started in travel litigation for six months working on a variety of claims like foreign road traffic accident claims, holiday illness and defendant claims, before moving over to Hudgells’ Civil Liberties team in October last year.

Dan qualifying comes eight months after Hudgell Solicitors announced a new scheme in February this year to enable six new trainee solicitors to earn and learn – benefitting from accruing a period of recognised training alongside their studies.

As a sign of investment in its own in-house legal talent, only existing internal candidates with at least six months prior work experience with the firm were selected.

And while Dan started his studies just before this, his qualification is further proof of the firm’s commitment to invest in its own people.

“Hudgells has been fantastic throughout,” said Dan, who is based in the firm’s Manchester office.

“It was difficult to start with because April 2020 when I started my training contract that was just at the start of lockdown, so I actually started it in the same bedroom where I revised for my GCSEs.

“It stands you in good stead when you learn the process from the bottom up. Right from the start the senior members of staff were very helpful showing me the way to do things and explaining very complicated things in a way I could understand.

“Ever since Rachel Di Clemente was appointed chief executive in May 2020 she has had a clear vision on how to progress and support early legal careers and qualification routes.

“We had six trainees that were appointed earlier this year so it is fantastic to see the next cohort come through and it will stand the company in good stead for years to come.”

Mrs Di Clemente insists Dan’s progress is evidence of how working as part of Hudgells’ expert team of legal professionals gives new starters a platform on which to build a rewarding career.

“Our flexible routes to qualification as a solicitor benefit candidates wishing to complete their LPC or apprenticeship part-time alongside gaining work experience,” she said.

“Dan’s progress also shows our commitment to promoting from within and investing in our people with supported qualification routes.

“Giving Dan and our current crop of trainees the chance to work on some of our high-profile cases can only benefit them and our firm going forward.

“We are all really proud of Dan and congratulate him for completing his training contract to become a solicitor in an NQ role in our Civil Liberties team.

“He is a young man of great character who has thrown himself into Hudgell life – to the point where he signed up to eat 19 of the hottest chicken wings to help a charity cause of one of our clients to raise more than £2,000 with a colleague for the Spinal Injuries Association.”

Trainees given chance to work on Post Office Horizon case

In the last year, Dan has worked on high-profile cases such as the Post Office Horizon scandal – which has seen Hudgell Solicitors represent subpostmasters in getting their convictions quashed – and inquest into the deaths of the victims of murderer Stephen Port.

He says working in the Manchester office under the likes of Head of Travel Litigation Paul McClorry and Civil Liberties Associate Solicitor Terry Wilcox – having them “support and believe in me” – was a big help in enabling him to finish his training contract.

He also reserved big thanks to Travel Litigation Executive Anthony Hey for encouraging him to put his name forward in the first place and for “exposing me to defendant work in travel litigation”.

“One thing working on a variety of cases has taught me is the ability to adapt to different types of claims, so right from the start from CICA claims to travel litigation and then now inquests and inquiries, I feel like I’ve become a bit of an all-rounder,” Dan added.

“I’m now able to pick up anything and have a good understanding of how a claim should be run depending on what type it is.

“I have been heavily involved in the Post Office Horizon work since about February this year and the highlight of that was towards the end of April when we had 29 clients who successfully appealed their convictions – it was great seeing them all celebrating outside of the Court of Appeal.

“We were day to day talking with these Post Office clients. A lot of them were quite anxious before the appeal trial date and it was very much reassuring them and advising them about the process, so it was great to get the reward of these convictions being successfully quashed and then it was nice afterwards because they were all very grateful.”