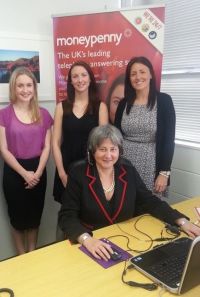 After visiting the Moneypenny telephone answering service in Takapuna, which operates with British, and local, staff handling the business’s night-time calls, she says there are very strong commercial advantages in operating in another time zone and even in another season.

The High Commissioner says “I was impressed that Moneypenny put an emphasis on the quality of their service. They were not doing this for cost cutting reasons, this was about providing the most efficient service to their clients .I genuinely believe other British companies can capitalise on this.”

“The location is an irrelevance as the client in London or Glasgow doesn’t know where the person is that they are speaking to.

“I think as a business model there are applications for financial services, back office processing operations and as Moneypenny has done, a personal PA service. From the other side of the globe Moneypenny   looks after UK calls seamlessly exactly to a company’s brief  and as far as the caller is concerned there is no difference, from recognising regular callers, putting calls through, to taking messages and forwarding them immediately by email, fax or text message.

The High Commissioner says Research and Development firms could see research taken forward in New Zealand and then handed over to the daytime shifts in the United Kingdom.”Certainly in industries which are run on the Internet and there is no physical product, people can just fire up their computers and pick up their work.”