Godesdon Road – 6 Planning Changes for a Street under Siege

Education has been Cambridge’s stock in trade for centuries. As the student population expands, so does the need to provide purpose built accommodation.  The city has also undergone a massive planning transformation thanks to IT, science and bio-technology industries flocking to the area to access this pool of graduates.

Things used to be straightforward for the good folk of Godesdone Road. It is a typical Victorian/Edwardian terraced street just outside the central conservation area to the north of Cambridge city centre.

But today, it sits at an epicentre of neighbourhood change, surrounded by planning applications for student accommodation, supermarket and hotel developments. Some locals are resistant to change; some welcome cleaning up the eyesores around them.

Either way, this is an epic story that illustrates how our urban centres are changing to meet new demands, how planning decisions are driving these and the impact on residents.

The area is part of the Eastern Gate SPD, which Cambridge City Council formally adopted in 2011 for regeneration.  It recognised the poor quality streetscape and identified it as an area to soak up the demand for student and tourist accommodation, given its proximity to the historic city centre.  This fundamentally changed the character of the area for the Godesdone Road residents. It was the start of a series of overwhelming and ongoing changes which opened the floodgates for proposals in the following years. 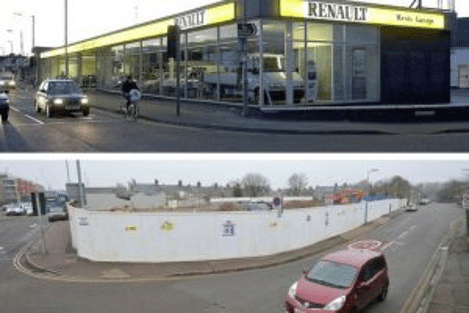 West’s Garage – Before and After. Images courtesy of Cambridge News

In late 2012, West’s Garage, a car sales and repair business that had been in operation since the 1950s, closed down.  The firm wanted to re-locate using the proceeds from the sale of the land.

In 2013, a planning application was received for 222 student flats and communal facilities, open space, cycle parking, and external landscaping for the new student housing.

Cambridge City Councillors turned down the proposals in May 2015, going against the advice of planning officers. It felt the building “would be poorly integrated into the locality” and “would overwhelm the existing houses, visually dominating them to an undue extent and creating an unacceptable sense of enclosure.” 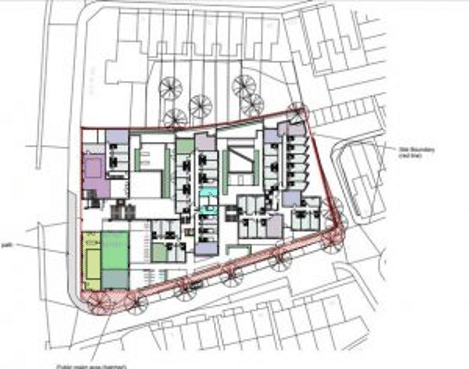 The decision was overturned on appeal by the Government’s Planning Inspector. The appeal found that the higher rise parts of the development were appropriate for the more commercial southern end of the development. The stepped nature of the building was in keeping with that of the Godesdone Road end and deemed acceptable.

Work started in September 2017. The garage buildings were flattened, the site cleared and construction work began on the new student housing.

As if 4 years of uncertainty wasn’t enough for the residents, contamination was discovered on the site once the foundations were started to be laid.

A stop notice was issued by the council.  Building work ground to a halt as petrol and other potentially hazardous pollutants were found in the soil and groundwater to the north and western edge of the site, close to the back gardens of Godesdone Road. 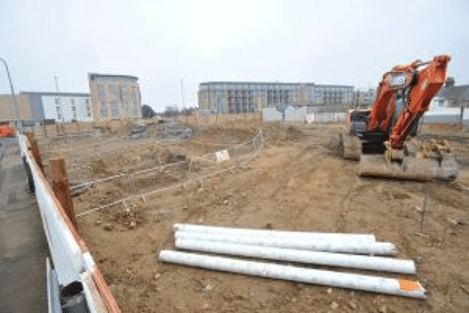 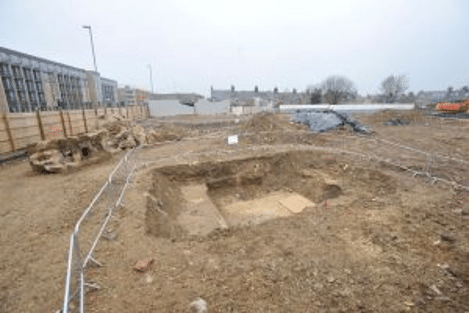 On further investigation, the pollutants came under the classification LNAPL – light non-aqueous phase liquids. These included petrol, diesel, benzene and other fuel oils. They are not always easy to get rid of because they are immiscible (won’t mix) with water.

In our Premium Plus Planning Report, we look at potential land contamination as well as the local planning situation. In the report, we have identified the potential presence of tanks which would have flagged the issue to the developer and any homebuyer.

The site slopes away from the former garage towards the River Cam, so the pollution may have leached towards the homes and into the river for years.

The appeal decision made it clear that any unexpected contamination found during the works would need to be dealt with. The LNAPLs were then cleared from the site close to the Godesdone Road residents, who endured stressful months of soil sample tests, excavations and waiting for the results. 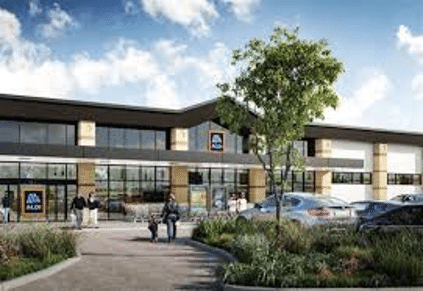 Another garage, this time a Honda dealership, has followed the West’s Garage site redevelopment. A further 200 student flats have been proposed, while Honda seeks a more out of town location to relocate.

And where there is a large influx of students, there is a need to feed them.  An application for a new Aldi supermarket was received in March 2018. Shortly after, a new Lidl was approved by splitting an existing Homebase in two and slotting it in between a furniture shop.

Other supermarkets are already well represented in the area as there is a Tesco store about 100m away and an Asda in the Beehive Centre, about 600m away.

Local Councillor John Hipkin expressed his disbelief at this, saying that bringing new food discounters close together would only encourage more traffic into the area specifically to shop there.  While local students won’t be driving, the Lidl application only made provision for 110 cars, which could be woefully inadequate for the potential demand that could be generated. 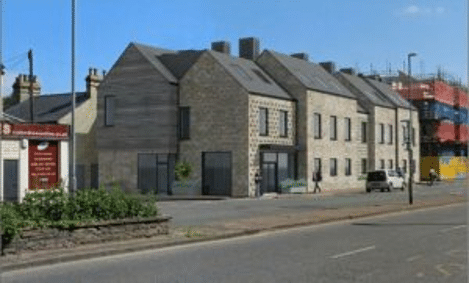 In 2018, a Travelodge and Premier Inn hotel were given the go ahead for development. Both sit directly opposite the junction of Godesdone Road and the new student accommodation on the West’s Garage site, which was finally completed this year.

Since the Travelodge opened, it has been the scene of increasing concern among residents of alleged drug dealing, sex workers and anti-social behaviour.

Then, in March of this year, further plans were brought forward to develop a “super-budget” easyHotel right on the corner of Godesdone Road on the site of the J Cooper furniture store. The current owners say that they can’t compete in the current retail climate. 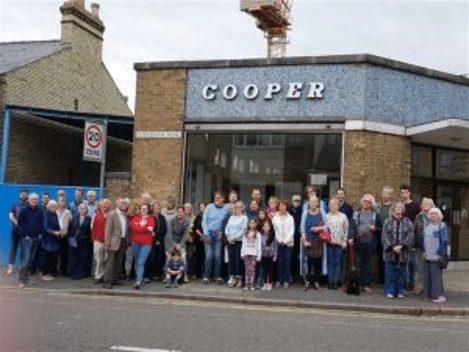 Image of Godesdone Road protestors outside the J Cooper furniture store – soon to be an easyHotel. Picture courtesy of Cambridge Independent.

This 100 bedroom hotel was the straw that broke the camel’s back for the residents. The proposals had no parking and no adequate disabled access, nor any communal area inside. This meant that guests could gather outside in the street as the rooms will be too small for socialising.

Councillors were minded to reject the proposal in June on the grounds that there were other budget hotels nearby and that the development was so close to the Godesdone Road properties.

However, in September Cambridge City Council said that these arguments were “highly unlikely to be successful at appeal”. Their report added that “the proposed hotel bedrooms would help meet the rising need for hotel accommodation in the city”. The planning application for the £24.99 a night hotel was approved by the chairman’s vote and night times on Godesdone Road may never be the same again. 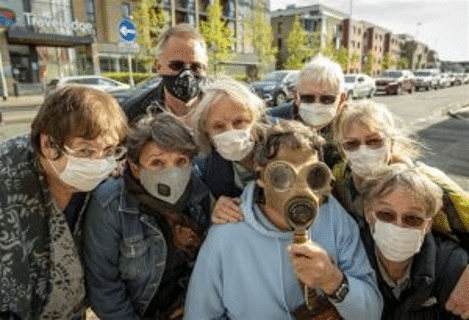 Residents protesting at the junction of Godesdone Road and Newmarket Road. Travelodge in the background. Image courtesy of Keith Hepple.

All of these development proposals have flagged concerns about air pollution in the area. A residents’ petition of 400 signatures was collected in May of this year. It urged the Council to withhold approval of any development on or close to Newmarket Road, unless they did not worsen congestion, air pollution or generate additional road safety problems.

Local residents say the proposals “will soon be adding hundreds of extra vehicles to the road.  Developers would be required to do nothing more than tinker around with some bus stops and provide vague assurances”.

Campaign co-ordinator Mike Evans said “easyHotel is proposing that taxis and cars use the double yellow lines on the Newmarket Road frontage for guest drop-off and pick-up.

“The whole point of double yellow lines is to prevent the very obstruction, bottleneck and safety risk that easyHotel now want to inflict on us.”

Analysis of air quality close to Godesdon Road in a Premium Plus Planning Report clearly shows some polluted areas as a result of the Newmarket Road being declared an Air Quality Management Area (AQMA). Trend data from our partners Earthsense shows that this has grown steadily worse over recent years.

A Nationwide Pattern – Happening near your Client 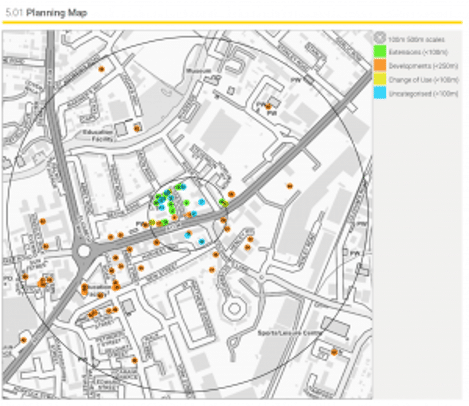 Godesdone Road is a typical terraced street similar to many across the country close to town centre edges that are changing rapidly.

Conveyancers should support their clients, regarding how transactions in these types of locations could be impacted from polluted land revealed during re-development as well as the potential traffic and air quality issues from more planning approvals.

FCI’s Premium Planning Plus Report pulls “live” planning data at the request of each report, ensuring that the very latest available information is used to compile the product.

Using FCI’s unique intelligent FCICapture technology, we identify developments which, although lying outside of the search boundary, if completed may, in reality, extend within the area of interest around the subject property.

This means schemes near to Godesdone Road that could have a strong visual and traffic impact will be picked up, unlike other similar planning searches.