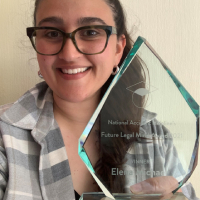 BPP University Bar student Elena Michael has been named the winner in an annual search for the nation’s most promising legal talent.

Two students were named as joint runners up – Gabrielle Butler, a first year University of Cambridge Law student, and Lou Lou Curry, who is studying law at BPP University.

Gabrielle focused on the need to provide better access to justice for women who experience sexual violence, while Lou Lou argued that the law needs reforming to change the difficult burden of proof facing LGBTQ+ asylum seekers.

Elena will receive a prize fund of £2,000 to help further her career. Gabrielle and Lou Lou will each receive £250. All three students can take part in mentoring with experienced lawyers from National Accident Helpline.

Elena said: “It took me several days to process the news that I’d won. I love what Future Legal Mind stands for in celebrating those just starting out in the profession and appreciating our potential to innovate.”

Gabrielle said: “I’m thrilled to have been named a runner up. Even being named a finalist was a shock as I entered the competition with no expectations. I’m over the moon to have done so well.”

Lou Lou said: “I am beyond delighted. The mentoring and prize fund will go a long way in furthering my legal career and I am grateful for this boost in both my confidence and career.”

Will Herbertson, Marketing and Strategy Director of NAHL Group and one of the judges, said: “This year, we received the highest number of entries ever. This made the task of choosing a winner a particularly challenging one.

Gabrielle showed her passion for challenging laws that discriminate against minority groups. Lou Lou drew attention to a lesser known, but equally important aspect of the law that needs reforming to benefit minority groups.

This award recognises individuals that try to help others and strive to do the right thing – which is why I’m pleased to confirm that Future Legal Mind will be back again in 2022 and opens for entries in September.”

Future Legal Mind has been running for seven years and previous winners and finalists in the competition have gone on to become barristers and solicitors.

Further information on this year’s winner and runners up can be found here.