It would be very tempting to think that after the sunniest spring and summer on record for many, together with some of the lowest rainfall totals, 2020 has been, at least weather wise, remarkably calm. But we so often have short memories.

We take a look back at the year so far and as conditions turn decidedly autumnal, consider how, as we have been understandably distracted by Covid-19, climate change and the threat from flooding never went away.

It was just seven months ago, pre-Covid and seemingly a world away, that the UK was hit by three major storm systems – Ciara, Dennis and Jorge. It left hundreds of people in communities up and down the country facing months out of their homes at the same time as the global pandemic took hold.

On Sunday 9 February, heavy rainfall from Storm Ciara caused severe disruption across the British Isles. The Environment Agency (EA) issued 186 flood alerts, 251 flood warnings and 1 severe flood warning in England.  The highest rainfall total was recorded at Honister Pass in Cumbria, with some 179.8 mm (7.08 in) of rain over the weekend.

The Met Office have declared Storm Ciara as one of the worst of this century [2] so far, rivalled only by the 19th December 2013 storm that caused widespread power cuts. Flooding forced residents to abandon their properties in parts of Lancashire and Yorkshire, including Whalley where homeowners had to be rescued by boat.

In Mytholmroyd, even intact flood defences do not guarantee protection and can fail under extreme conditions. The £30m flood scheme was not due to be completed until the summer and was unable to prevent the River Calder from bursting its banks. The problems were compounded by a steep path on the valley which had repeatedly been resurfaced with hardcore. The hardcore washed away, blocking the drains.

Police were called to Bridge House Guest House and Sonia’s Bistro in Hawick in the Borders to reports of structural damage. Footage and pictures posted on social media showed a wall of the building collapsing into the fast-flowing River Teviot leaving the rooms inside exposed. The building had stood for more than 200 years and had never had similar problems in the past, an indication of the new bar set for many rivers following inundation by the storm. 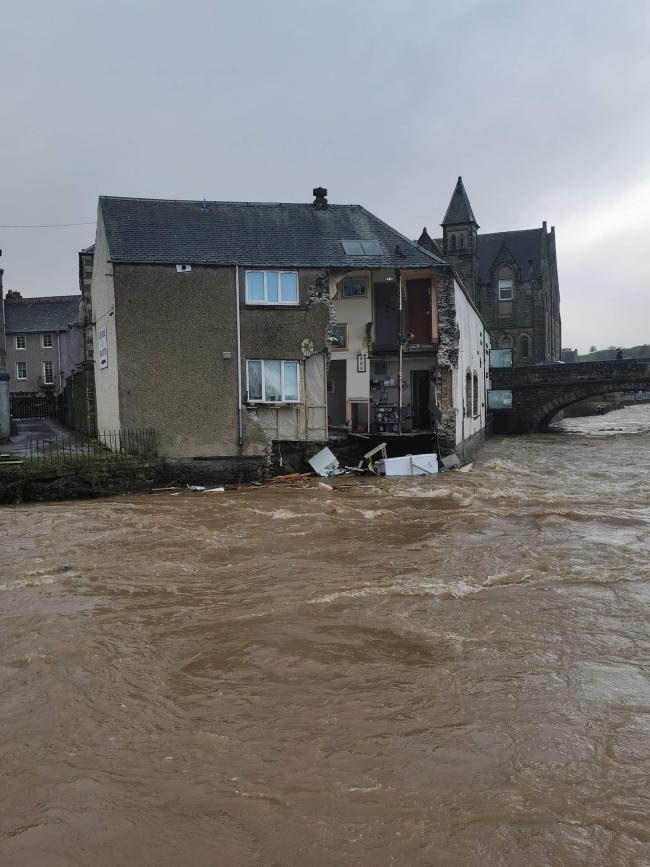 Image courtesy of the Border Telegraph 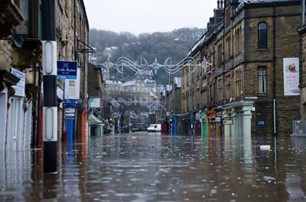 Heavy rainfall caused severe flooding in mid Wales and southern England, with many rivers reaching their highest levels ever recorded. Further flooding was also reported in areas of northern England that had been inundated by Storm Ciara the previous weekend.

Many local councils established their emergency protocols to deal with the storm and its aftermath, including Calderdale Metropolitan Borough Council, who activated their Gold Command service with the local emergency services. In Hebden Bridge, Sourena Jowkar’s business, Leila’s Kitchen, had only been open for four months when it was crippled by Storm Ciara only for the clean up to be undone again by Dennis.

Residents pointed furiously to the fact that three serious floods had occurred in eight years. Previous flood damage had left a hole in the flood wall, which the EA has not yet prioritised for repair and proved to be the culprit, as water cascaded down to the bottom of the village.

Although less severe, Storm Jorge added a further 50mm and more misery to residents in South Wales, Shropshire and the North West as heavy rain fell on already saturated ground. 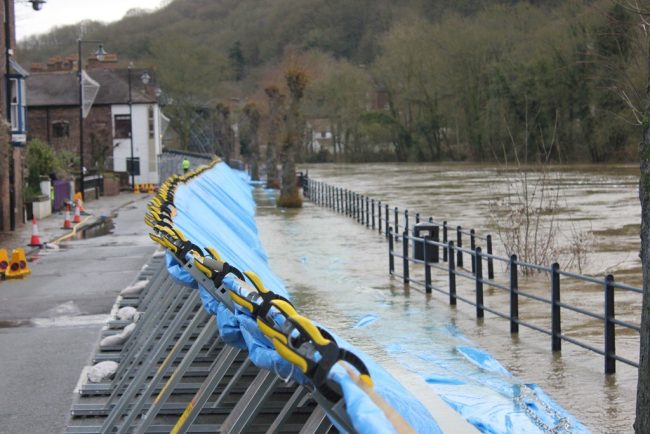 The iconic Ironbridge in Shropshire became the focus of intense media scrutiny over spiking river levels from Shrewsbury all the way down the Severn Valley as the catchment disgorged vast amounts of water off the mid-Wales mountains. Temporary barriers had been put in place when Ciara hit and as Dennis then Jorge came through, it became too much and on February 26, the sheer force of the water at an unprecedented height of 6.8m pushed back the defences and inundated houses along the bank.

It was the wettest February on record and fifth wettest of any month. It was also the 5th mildest winter on record, underlining the impact of ever stronger Atlantic weather systems propelled along the jet stream, keeping colder drier continental air away. 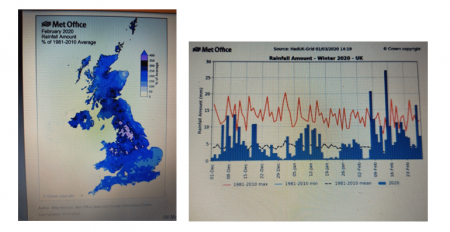 Images courtesy of The Met Office

But long after the water has subsided, it is the human emotional and mental cost that is taking its toll – compounded by the isolation and restrictions that were brought in due to Covid-19 in the Spring.

Some 680 Residents living along the River Taff in Pontypridd were affected by the trio of storms, many clearing up only to be inundated once again. Many in the community had limited means, lacking insurance to cover the cost of replacing wrecked belongings. Their location has become prohibitively expensive with insurance rates at some £70 to £100 a month.

Florence Heritage, 28, and Cosmo Valseca, 48, were in exactly this position.  They live in a rented house close to the river, had lost almost all their furniture and their oven was broken. They received a £500 hardship grant from Rhondda Cynon Taf Council but this doesn’t pay for the emotional damage. Indeed, while many of the residents rallied round to support them and their neighbours, there was concern that the cost facing the Council could lead to further cuts to local services.

Two months on in April, many of them are enduring the trauma of being locked down in homes that are still damp and damaged. Refurbishment of houses was progressing steadily until the Covid-19 outbreak, though they were still waiting for carpets to be fitted downstairs and for walls to be re-plastered. Some residents in Lewis Street that were vulnerable or told to shield had to put off workmen coming into repair for fear of catching the virus.

The street was a bizarre sight in April. No sign of flooding, but sand bags still there just in case. It was also half deserted, some of their occupants having been temporarily re-housed or fleeing to live with relatives. Residents, observing the two metre rule, took turns in helping each other out, as building firms went into shutdown.

If you cast your mind back to November last year, you may recall the events of the River Don flooding [3] and its impact on the community of Fishlake.

Pensioners Kath Smith and Mick Ryan had to flee their bungalow at 10pm on a bitterly cold Friday night as waist-high water swept inside. They thought it was the most traumatic thing to have hit them, until Covid-19 arrived.

They, along with about 300 other people spent lockdown living with friends, sleeping in spare rooms or staying in temporary accommodation following the floods. Local businesses which had barely survived following the floods faced a second wave of economic decimation.

With the threat of current and future re-infections, the results for the village would be utterly devastating: the population here is relatively elderly, while the wider region has a relatively high rate of lung disease – a hangover from its mining heritage – a picture that could be easily reflected in many other similar communities.

When Boris Johnson announced on 23rd March that “we must all stay at home”, many of us looked outside at the sunny weather and got on with some DIY or opened our laptops and got working from dry and comfortable homes.

For the Fishlake residents, now some 5 months after the flood, extreme self-isolation while living with friends or temporary accommodation miles from home, felt like life was on hold.  At this point, some 90 per cent of those evacuated from the 150 properties were still away from home.

The Association of British Insurers (ABI) has estimated the total industry payout for some 82,000 claims from Ciara and Dennis was £363m. While flood claims accounted for just 10% of the total, it took some £213m or 59% of the costs. Loss adjusters reported that up to 20% of claimants had been forced from their homes.

Recognising the impact of lockdown, ABI said that they prioritised the most vulnerable or key workers in terms of claim processing, but regulations forced their hand in terms of contractor availability.

The British Damage Management Association (BDMA) wrote an open letter to the government at the height of the pandemic in April to treat their members as key workers so they could rectify victims’ property. This fell on deaf ears until the easing of restrictions in the summer, so that only by June/July were properties able to be renovated for many.

It begs the question that when the storms and flooding return as they surely will, at a time when Covid-19 is now back with a vengeance, will residents be left isolated, potentially at major health risk as the winter nights and colder days draw in.

Climate Change has not Gone Away

Ironically, climate scientists believe that 2020’s record spring and summer sunshine may have had something to do with the lockdown and reduced carbon and air pollution from cars and planes. But it also underlined the dramatic swings our weather is going through due to climate change.

The South East has seen near record low MORECS soil moisture readings which could spike a rise in subsidence claims. [4] Over the longer term, climate change is driving new, more extreme patterns of wetter weather in the north and west of the country, with a drier south and east. But nowhere is safe from sudden local deluges, and dry soil could also exacerbate very flashy surface water run-off if we were to experience sudden heavy rainfall in the coming weeks and months.

The EA published revised climate change allowances for major river catchments [5] in 2016, with some updates on sea level rise in 2019, but this is already feeling very out of date, given the new standard set by the trio of storms earlier this year.

As we work our way through a new normal and a very uncertain future for us as communities, the threat of flooding remains the looming menace that people may have conveniently forgotten given all of the headlines from the pandemic.

Detailed analysis of the flood risk, derived from complementary data sources and flood mapping coupled with unrivalled experience gives clarity, and ultimately makes those all important decisions on property acquisition that much easier.

The Flood Appraisal service is designed to complement our comprehensive range of due-diligence products, providing an enhanced view where a known flood risk exists.

Find out more information on The Flood Appraisal Service [7]