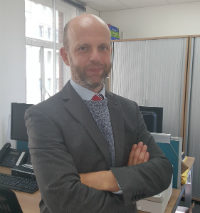 Experienced actions against the police specialist Andrew Frederick says he is delighted to have joined Hudgell Solicitors [1] – a firm he says is ‘meeting the increasing need’ to challenge unlawful treatment of innocent people by state bodies.

Mr Frederick has more than 10 years’ experience in the specialist area of work and joins Hudgell’s growing Civil Liberties department in London, having worked in the capital at GT Stewart for the past six years.

With experience of representing people with civil claims against the police, the prison service, Home Office, Magistrates’ Courts, and other detaining authorities, he has expertise in leading claims for assault, unlawful arrest, false imprisonment, malicious prosecutions, breaches of human rights, discrimination, and data protection issues.

Mr Frederick says whilst actions against state bodies and their representatives often lead to compensation settlements, holding to account and exposing the wrongdoings of those in positions of authority which is often the motivating factor for the people he represents.

“Compensation is obviously a big factor in the work we carry out on behalf of clients, but I’d say that for most of the people I represent, holding people to account is what they want to do most,” he said.

“They want to make sure they are exposed for what they have done and to ensure others don’t suffer at their hands.

“People have often been bullied and feel they have no place to turn. My legal expertise is in helping people make complaints, often against police officers but equally other detaining authorities and public bodies, which can lead to criminal proceedings or misconduct proceedings and dismissals.

“I have also represented many families at Coroner’s court inquests, where my role is to help them find out the truth of what happened after their loved ones have died having either been in contact with the police, when held in custody or in prison.”

Mr Frederick recently represented the family of 18-year-old Osvaldas Pagirys, who died whilst detained on remand for stealing sweets at HMP Wandsworth in November 2016. He had been held in prison as he awaited extradition to Lithuania under a European Arrest Warrant for minor theft.

Mr Frederick said: “It was his first time in prison custody and he found the experience extremely distressing. He struggled to cope, repeatedly self-harmed and had been found with a noose around his neck on five separate occasions prior to his death.

“Despite this, on the day he died officers didn’t respond to his emergency bell from his cell for 37 minutes. This was despite the Prison Service’s target response time of five minutes.

“They found him hanging in his cell and a 10-day inquest earlier this year subsequently returned a unanimous verdict identifying numerous failures in the actions of the prison staff, and that the delay in responding to his emergency cell bell was a failure which did contribute to his death.

“It is these kinds of miscarriages of justice which must be challenged at all costs, and I am delighted to be joining a firm which is growing its work in this area of work and meeting the increasing need to offer representation.”

Andrew Petherbridge, head of civil liberties at Hudgell Solicitors, said: “We are delighted to have added somebody of Andrew’s experience and expertise to our team in London.

“Andrew is passionate about standing up for the rights of people and challenging and holding authorities to account for unlawful actions.

“Most importantly he is dedicated to getting the best results for his clients, which fits perfectly with our commitment to always righting wrongs and seeing the person and not just the claim.

“Given our ongoing work in London, including Cyrilia Davies Knight representing survivors, residents and bereaved family members and loved ones at Grenfell Tower inquiry, this appointment reflects our commitment to this very important area of legal work and our ambition to further grow the department in the capital.”