England is on course to be lacking more than one million new homes to meet the demands of a growing population after years of reducing new home build development.

According to research by conveyancing search provider Search Acumen, using official figures from the UK government and the Office for National Statistics (ONS), England has been experiencing a shortfall in the number of new houses being built compared with the number of new households being added to the population for more than a decade.

Search Acumen compared the volume of new homes completed in England each year since 1976 with new dwellings needed to accommodate the growing number of households over the same period. It estimated household growth by assessing annual ONS birth, death and migration data, and used the ONS’ average annual number of people deemed a household to determine how many new homes would meet the extra demand. 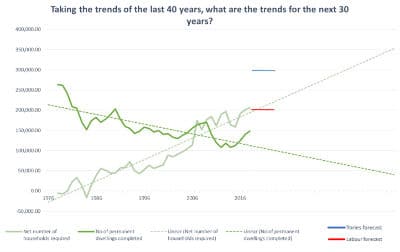 Table 1: Comparison of new homes built in England from 1976 to 2016 with growth of English households based upon population growth and annual average household sizes

According to the data, in the mid-noughties the creation of new households outstripped supply for the first time in three decades – a trend which has accelerated as the population in England has increased. This drop has been exacerbated by the average UK household size reducing by 16%, from 2.78 persons in 1976 to 2.34 in 2016, meaning more but smaller households putting increasing demand on property supply.

On the eve of the 2017 General Election, both the Conservatives and Labour pledged to increase new home builds between 2017 and 2022. Search Acumen has compared those pledges – of 300,000 and 200,000 completed new homes each year over a five year period respectively – to its findings. According to projections, only the Tories’ immediate jump to 300,000 homes per year – double 2016’s completions – would only address the current shortfall in the short term.

Taking a closer look at the gap that developed after 2005, the data can estimate the shortfall in supply created by the slowdown in new house builds. Between 2005 and 2016, more than 530,000 too few homes were built to meet the growing demand. 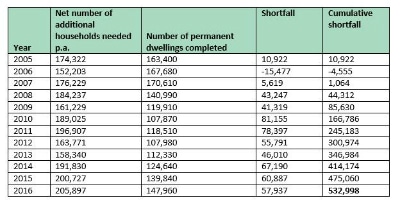 Table 2: Cumulative shortfall of new homes in England between 2005 and 2016

Search Acumen’s research also projected how many homes would be completed each year and how many more households would be created. If trends do continue, England will need an additional 510,000 homes to meet demand. This, on top of the current shortfall means England could have more one million too few homes by 2022.

Table 3: Assessment of projected cumulative shortfall of new homes in England over the next five years

More than one million homes additional homes may sound like a daunting proposal in a relatively small country. To illustrate the amount of space needed Search Acumen theoretically speculated as to the amount of potential available land for housing development in England by assessing only available brownfield and green belt land. According to government figures, there are currently more than 31,000 hectares of brownfield land in England that is suitable to build homes on. In 2015, housebuilders were able to build 37 domiciles per hectare on brownfield land. Therefore, Search Acumen’s analysis suggests that there is enough brownfield land in England to meet cumulative demand for housing for the next five years if trends continue.

Finally, Search Acumen estimated how much green belt land could be theoretically affected. The research found that if housebuilders continued to build 14 domiciles per hectare on the more than 1.1 million hectares of green belt land in England, only 14% of all green belt would have to be turned over to developers to meet cumulative demand into 2047. 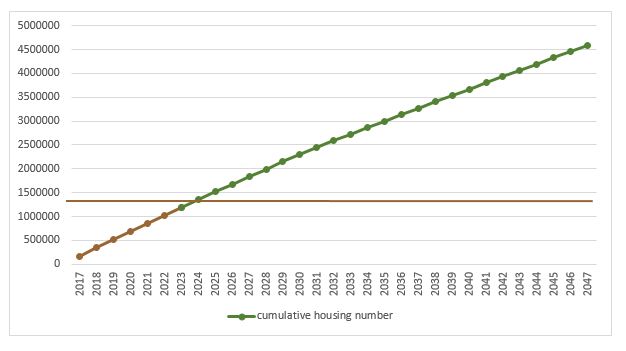 “The housing market in all corners of England has ground to a halt as people struggle to find a home that fits their needs and their budgets. Our research suggests that, even with housing supposedly higher up the political agenda, the pledges made at the last election won’t do the job of keeping up with demand in the long-term after years of under-investment into new housing.”

“As supply has weakened, demand continues unabated with more dispersed households, an increasing number of births, and net migration unlikely to be affected by Brexit and proposed changes to border controls.”

“We face a future where first-time buyers are further squeezed by rising prices, and where those already on the ladder looking for an affordable home simply cannot.”

“To make up for years of under supply, we need to embark on the greatest housing boom this country has seen in a century. But it is possible: we have the space, we have the desire and we have tens of thousands of housing professionals in the private and public sector ready to go. We just need our leaders to share our industry’s sense of urgency and begin laying foundations for economic success right away.”