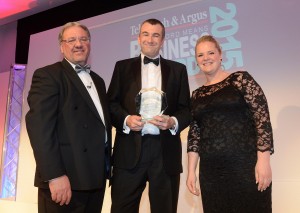 Eclipse Legal Systems, the Law Society Endorsed provider of legal software solutions, is delighted to announce its recent win in the ‘job creator of the year’ category at the Telegraph and Argus Bradford Means Business Awards.

The gala awards evening, which took place on Saturday 13 June in Bradford, saw an array of local businesses nominated for the 11 award categories. Hosted by BBC Look North presenter, Charlotte Leeming, the evening was a celebration of the success and achievement of local firms and individuals.

Eclipse Legal Systems, nominated for an award by a recent member of staff, was successful in winning the ‘job creator of the year’ crown, beating the other two major shortlisted contenders; Yorkshire Building Society and Provident Financial – both much larger organisations.

Founded in 1987 Eclipse Legal Systems now employs over 160 staff. After making huge investments in expanding its operating premises, Eclipse maintains an enviable local position in providing great employment opportunities for a broad range of skillsets. A raft of new jobs have been created in recent times – on top of the 40 roles filled in 2013, an additional 30 people were employed by the company last year and a further 10 roles have been filled so far in 2015.

“We are absolutely delighted, not only to have won this award, but to be in a position to offer such a range of roles to people in Bradford and the surrounding areas. It’s fantastic to be recognised for our work within the community and we see no end to the requirements for motivated and driven candidates!”