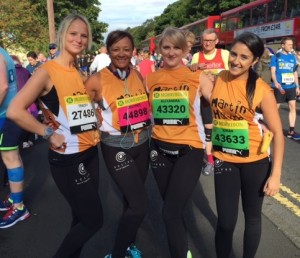 A number of staff at Eclipse Legal Systems [2] took part in the Great North Run on 13 September to raise funds for Martin House Hospice [3].

The group of runners participated as ‘Team Kelso’, a dedication to Dolores’ son, Kelso, who sadly lost his battle to cancer in 1993.

Despite the unexpected sun and soaring temperature, there were some excellent times posted by our runners, who all completed the half marathon in less than 3 hours.

In order to show support for ‘Team Kelso’ all the staff at Eclipse took part in fantastic fundraising efforts – so much so, the original £5,000 target was increased to £6,000 – with special thanks to Claire Field (accounts consultant) for donating her time and baking skills to bringing in a variety of cakes to the Eclipse HQ, helping to raise £120 towards the overall target.

The fundraising total is now over £9,000 and continuing to increase, with all proceeds going to Martin House, a hospice for children, young people and their families from throughout the Yorkshire region.

“The support Team Kelso has received is overwhelming! We would just like to say a huge thank you to all who have donated as it truly makes a difference to the difficult lives of the children and families who rely on the Hospice.”

To show your support for our runners and the Hospice, visit the Eclipse Virgin Money Giving page [4].