E-signatures: Arken.legal Calls for an Urgent Review of the Law 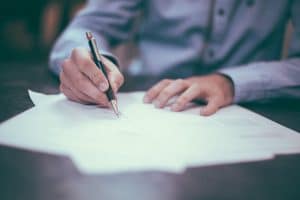 In the current climate, which is so rife with uncertainty and anxiety, one thing clients can do to give themselves some peace of mind is to get their Will in order. Practitioners have reported an astonishing spike in the demand for Wills, particularly at the early stage of the COVID-19 lockdown, an estimated uplift in the region of 70 -100% for some businesses. And it’s not just Wills that are important at present: clients should also be turning their minds to who is authorised to look after their personal wellbeing and financial affairs should they become incapacitated due to the virus, or isolated in hospital with no ability to manage things for themselves. To this end, Lasting Powers of Attorney, General Powers of Attorney and Advance Decisions are all important documents which could potentially save clients time, stress and money in the long run, but most importantly giving them the assurance that, were the worst to happen, their wishes, wellbeing and finances would be entrusted to the people they would themselves choose.

Making Wills and other estate and personal planning documents remotely is quick, easy and effective using an online system like Arken Online Wills, or a client data capture tool such as Arken Acquire in tandem with Arken Professional. Instructions and clarification can be taken over the telephone or by video conference. But advising on the correct execution of documents has been giving practitioners something of a headache.

Signature and witnessing requirements for Wills are still governed by Wills Act 1837, an Act formulated in Victorian England to protect the vulnerable against fraud by having two independent witnesses in the physical presence of a testator to ensure that testators had given appropriate testamentary consent and were not subject to undue influence. There has been no official indication that the requirements of this legislation can be deviated from even in the face of a global pandemic where government-mandated social distancing dictates that people maintain a 2-meter distance from each other.

And even though we live in a completely different era where technological advances could allow a much easier process whilst safeguarding the vulnerable, there has been no sign of an emergency law change. The best advice is still to fully comply with the 1837 Act as there is no guarantee that imperfectly executed Wills would be upheld:

The challenges of witnessing while social distance in place

Finding witnesses has required practitioners to employ a degree of inventiveness when it comes to protecting testators by maintaining social distancing, examples include:

Deathbed Will witnessing a significant challenge

It appears, that the NHS is advising doctors and nurses not to act as witnesses to Wills, because of their enormously high workload at present, and to reduce the risk of virus being brought into hospitals on documents. Therefore, when someone is in a hospital situation, it could be very difficult indeed to enable the signing of a Will or other document if no visitors or family members are allowed into the premises. In this instance, the practitioner is left with very little choice, as adhering to the 1837 act will be almost impossible. This highlights how vital it is that practitioners check-in with clients to execute outstanding Wills or to review old Wills before clients become ill: if they are admitted to hospital, executing legal documents will be virtually impossible. It will have to be a judgment call, then as to whether it is better to have an imperfect signature, such as via a video link, than no signature at all. It is impossible to tell at this stage how pragmatic Courts will be in finding valid imperfectly executed Wills which have been completed in a hospital or immediately before death in the current extraordinary circumstances, and no-one wants to be the first test-case. If a practitioner had to make such a decision, any records they can keep of their involvement with the testator and the instructions taken, can only be of benefit.

Learning from the wider Commonwealth

“If we look at other Commonwealth jurisdictions, far more pragmatic solutions have been adopted even before the pressure of the pandemic”, comments Sam Warner, Head of Legal Content at Arken.legal. “In Queensland Australia, for example, the Succession Act 1981 was much like the 1837 Act here. The law was changed in 2006 to allow less formal documents to be considered a Will, and in a fairly extreme case a draft text message found on a dead man’s mobile phone was accepted as a legitimate Will. It is hard to imagine such a scenario being contemplated here, but there must be a middle ground.”

Similarly, in New Zealand, the Wills Act 2007 had already granted the Courts somewhat more flexibility as to what could constitute a Will: s.15 allows that informal Wills can be declared valid by a Court before probate is granted as long as the Court is satisfied of the testator’s intention to create a Will. And in 2018 the NZ Courts were faced with an informal Will divesting a NZ$2.8 million estate which was jotted down across a number of pieces of paper, including the back of a postcard and on law firm note paper and found, read together, that they did in fact constitute a Will. All of the constituting pieces of paper were titled as a Will and were signed and dated with the same date. The Court found that there was testamentary intent, even though Will formalities had not been observed. As in the UK, New Zealand Wills (if not relying on s.15) have to be signed by the testator in the presence of two witnesses who then have to sign, and witnesses cannot be beneficiaries or a spouse.  As in the UK, these requirements are very difficult to abide by under lockdown, where the only people likely to be in the same household bubble would be precluded from being witnesses.

Despite there already being potential judicial flexibility, the New Zealand government rushed through an immediate modification order (Epidemic Preparedness (Wills Act 2007—Signing and Witnessing of Wills) Immediate Modification Order 2020) which amends the requirements in relation to the presence of witnesses to Wills, allowing the use of audio-visual links instead of physical presence. The testator can direct someone else to sign on their behalf via an audio-visual link, and two witnesses can sign copies of the Will from two different locations in view of the testator via audio visual link as long as they have both witnessed the testator signing via that digital link. In this way, the government has made an immediate and practical decision to respond to the need for remote signing when social distancing is being enforced. The IMO has only temporary effect for the duration of the COVID-19 epidemic.

The introduction of digital signatures

In the UK, the Electronic Communications Act allows digital signatures for several documents but specifically excludes Wills. In 2017 the Law Commission undertook a consultation on modernising the law relating to the execution of Wills, however this has been put on pause and the requirements of the 1837 act are still the ones which govern the signing of Wills. The Ministry of Justice has said that the relaxation of the rules has to be balanced against the need to protect vulnerable people and the need for a modern practical solution. STEP and other professional bodies have been in talks with the Ministry of Justice.

Call to action – please write to your MP

We would encourage all practitioners to take the time to write to their MP and their professional representatives to add to the debate around the need for a change in the signature and witnessing requirements for Wills, which was already necessary but has been made urgent by the need for social distancing. And the New Zealand example has shown that emergency measures can be temporary in response to extraordinary circumstances pending a more comprehensive review of the situation when quarantine conditions are abated.

For further information, please visit https://arken.legal/uk/more/covid19, where you can also find a link to MPs’ contact details and a sample email template, to enable you to add your voice to this vital issue.