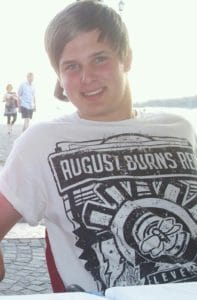 Parents of survivor discuss his rrehabilitation for road safety week.

The parents of a teenage boy who was left ’98 per cent dead’ after a being involved in a horrific collision on the way home from Download Festival, have spoken out about their son’s path to recovery to raise awareness of road safety.

Parents, Katherine and Bob Jones, and serious injury expert from national law firm, Irwin Mitchell, James Davies, are speaking out about the horrific accident as part of Brake’s Road Safety Week, which runs from the 21-27 November.

Music lover and guitarist Matthew Jones, from East Grinstead, West Sussex, was just 18-years-old when he was involved in the horrific double collision in June 2013, while travelling home from Download Festival at Donnington Park, Leicestershire, as a passenger in his friend’s car.

Matthew’s friend, who had only passed her test a few weeks beforehand, fell asleep at the wheel while driving on the M25, lost control of her car and collided with a lorry.

The car stopped sideways in the centre of the road, and while Matthew was on the phone to his father, a Highways Traffic Officer asking for help, a speeding van smashed into them causing Matthew catastrophic injuries.

Dad, Bob, aged 64, had been on the phone to his son when he heard a scream and a loud bang, he alerted his colleagues and made his way to the scene where his son lay trapped in the car, fighting for his life.

Paramedics were making a decision to give up on Matthew, as his heart wasn’t beating and he wasn’t breathing, when a witness, a retired cardiac nurse begged to have a go and managed to revive him.

Matthew, a keen football and tennis player who planned to be a pre-school teacher, was rushed to St George’s Hospital in Tooting, where medics told his parents he was 98% brain dead and were told to prepare for the worst.

Despite the odds, after six weeks in a coma in intensive care, Matthew began to regain some consciousness and was transferred to Glenside Hospital’s specialist neuro-rehabilitation ward in Salisbury on 6 August 2013, where he remained for six months.

Matthew is now a resident at Queen Elizabeth Foundation centre at Banstead in Surrey, where he continues to undergo extensive neuro-rehabilitation and three-and-a-half years after the accident is moving home at the end of this month.

Despite suffering setbacks, including MRSA, spasms from PAID syndrome, temporary blindness and ataxia, a condition which causes violent shaking, Matthew has learned to talk, write and feed himself again.

Although he needs professional carers and relies on a powered wheelchair and an adapted vehicle, Matthew can now walk very short distances with a special mobility aid and is now hoping to pursue a career in local journalism through his love of writing.

Katherine, who gave up her job as a medical secretary to care for Matthew after the collision, is now working with personal injury specialist lawyers Irwin Mitchell to adapt the family home to make it more suitable for her son’s needs, which include space for his electric wheel chair and a downstairs wash room.

These works, and Matt’s professional care and equipment, have been funded through interim payments obtained by Irwin Mitchell from the drivers’, who both pleaded guilty to careless driving, insurance companies.

Partner and serious injury expert at Irwin Mitchell, James Davies, who is representing Matthew, said: “Matthew is a truly inspirational young man who has overcome countless challenges which would have left many people wanting to give up.

“The injuries Matthew suffered changed his and his family’s lives forever and although nothing can turn back the clock, the funds he will receive will enable him to afford the on-going professional care and specialist equipment he will require for the rest of his life.

“We fully support Brake’s Road Safety Week to raise awareness of the six pledges for safe driving. Agreeing to these pledges can make the difference between life and death, as most collisions that happen on the road are preventable.”

Bob said: “Sadly as a Highways Officer, and previously a Fire Officer, I regularly witness the devastation caused by careless driving but nothing could have prepared me for having to attend the scene of my own son.

Katherine, aged 47, added: “I hope people read our story and recognise that cars are weapons. If you don’t use them carefully, lives can be devastated”.

“I cannot begin to put in to words how horrendous it has been to see my son have to struggle with such awful injuries and severe brain damage and through no fault of his own. An accident like this rocks the foundations of life as you know it.”

“We are so looking forward to Matt coming home. He has come such a long way in his recovery which is testament to his tenacity, positivity and determination and I am so very proud of him.”

Matthew’s story is being shared for charity Brake’s Road Safety Awareness Week (21-27 November) to highlight how driving whilst tired, at excess speed and under the influence of alcohol can devastate lives.