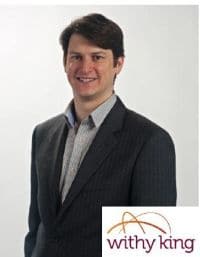 David Eagle, Head of IT

Withy King is a leading law firm with principal offices in the South West, Wiltshire and Oxfordshire, as well as London. A ‘UK 200’ firm with a turnover of approximately £17 million and an ever expanding client base, Withy King has its eyes firmly set on the ‘Top 100’.

In early 2013 the firm took the decision to switch to telephone answering specialists Moneypenny. David Eagle, Head of IT explains why:

“We had made the decision to outsource some of our call handling last year to ease the pressure on internal resources and had been using another supplier for around nine months before switching to Moneypenny. We had been concerned at the quality of the messages taken by our original provider as well as the overall service levels and started to investigate alternatives. We are part of Law South (a grouping of twelve high profile firms of solicitors based in London and the south of England) and, while we had looked at others, Moneypenny was recommended by one of the other members who had been using the service for a while. Fate seemed to step in at this point as Kevin Bishop, Business Development Manager at Moneypenny, whom I had known previously, made contact at about the same time and he suggested a free trial.

We diverted all our 0800 new business enquiries to Moneypenny during the day and all main switchboard calls out of hours (from 5.30pm to 8am). We saw a difference straight away both in the clear and precise message taking and the overall professionalism of the service and the likelihood is we will opt into other Moneypenny services as we move forward.

Prior to outsourcing we found we had been missing around 30% of our calls so inevitably opportunities were being missed and customer service was affected as a result. We needed total confidence in the people taking our calls, being absolutely sure they were portraying the right image for our business. Our Moneypenny PA Cerys and her small team do just that and very early on in the trial we were already receiving positive feedback from those people who had been critical in the past. We now know we are never missing a call or business opportunity and with spot-on messaging, we are able to call new business enquirers straight back which is proving to be far more effective than previously. Emails sent directly to fee earners out of hours also means they have the option to respond straight away rather than have messages waiting for them at reception the following morning.

Their flexible service fits in with the way we do business. Moneypenny also takes a pro-active approach, for example when they hadn’t received one of our calls for a little while they checked up and actually alerted us to a network issue at our end before we even realised there was a problem.

Prior to using Moneypenny, I spent a good deal of time worrying about this aspect of our day to day activities. I now feel confident and don’t need to micro-manage their service at all. We do have an occasional look at Moneypenny online which is great for management data but much of the time we actually forget we are outsourcing as it’s so seamless an arrangement between us. It just works – simple as that!”